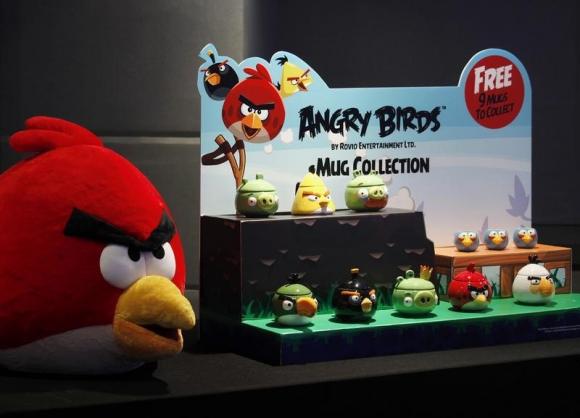 HELSINKI - Mobile games maker Rovio reported its operating profit fell 73 percent last year due to a drop in its licensing business, a latest sign its breakthrough Angry Birds brand is losing its appeal. Falling consumer product business, which includes toys, clothing and brand licensing, adds to problems of the Finnish company which has yet to see a repeat of the success of its original Angry Birds game launched in 2009. Rovio said its 2014 operating profit fell to 10 million euros from 36.5 million in 2013 and 76.8 million in 2012. Its total sales fell 9 percent last year to 158.3 million euros. Revenue from mobile games, however, increased 16 percent to 110.7 million euros as new games such as Jolly Jam and Angry Birds Stella Pop! helped its total annual downloads to reach 600 million. "Sales of consumer by-products did not move according to expectations, and surely we are unsatisfied over the result of our licensing business," chief executive Pekka Rantala said in a statement. Aiming to become an entertainment brand on a par with Walt Disney, Rovio has also expanded the Angry Birds brand into a spin-off TV series as well as educational playground concept, and is working on an animated movie, expected to premiere in 2016. Rantala said he was confident over the future and promised to come out in the coming months with major partnership deals related to the movie. Rovio has started to tailor its games to the Chinese market with help from Beijing Kunlun, and now plans to launch a new game only in Japan, the chief executive said. The original Angry Birds game, in which players use a slingshot to attack pigs who steal birds' eggs, is the No.1 paid mobile application of all time, according to Rovio. Last year, Rovio cut about 110 jobs, representing 14 percent of its workforce. - Reuters