PESHAWAR (92 News) – The 4th anniversary of martyrs of terrorist attack on Army Public School Peshawar was observed on Sunday (today). A ceremony was held to pay tribute to the martyrs and ghazis of Army Public School and College was held at Warsak Road in Peshawar today. The ceremony started with a special prayer for martyrs, followed by national anthem. 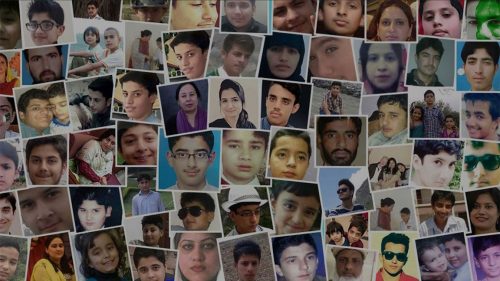 On December 16, 2014, terrorists stormed the army-run school and martyred around 150 people, including more than 130 young students. The incident shook the country and resulted in the formation of a National Action Plan to stem extremism and terrorism in the country, as well as the creation of military courts to try 'hardcore' terrorists. The barbaric Army Public School terrorist attack in Peshawar on 16 December 2014 was the fateful “black day” continues to remain a scar on the collective memory of the nation. Even after four years, the pain and sorrow of this utterly senselessness and heinous act remains fresh. A smartly turned out contingent of Pakistan Army presented the guard of honour. – Nation standing shoulder to shoulder with bereaved families – Khyber Pakhtunkhwa Governor Shah Farman laid a floral wreath at the martyrs’ monument and offered fateha for the departed souls. Later, he joined the families of Shuhada, large gathering of locals and school children for Quran Khawani within school premises. On the occasion, the Governor said entire nation is standing shoulder to shoulder with the bereaved families. – Country emerged from APS incident's test intact, strengthened – Foreign Minister Shah Mehmood Qureshi said that even after four years, the pain and sorrow of this utterly senselessness and heinous act remains fresh. He also said while the attack shocked the whole nation, it also tested the resilience and resolve of Pakistan to fight terrorism and extremism. “The country emerged from that test not only intact, but strengthened.” The minister said the anniversary of this tragic day is also a reminder for the international community that terrorism is a common enemy and must be jointly fought. He said we will never forget the sacrifices made by our innocent children. – Pakistan defeated terrorism – In his message on 4th anniversary of APS terrorist attack, Information Minister Chaudhry Fawad Hussain said brutal terrorists perpetrated the worst crime against innocent children which is unprecedented in history. He said Pakistan has defeated terrorism and the victory will be of our determination, will and people. – Nation will never forget great sacrifices of our innocent kids – In his message pertaining to the fourth death anniversary of Army Public School Peshawar, Defence Minister Pervaiz Khattak says Pakistan has rendered unmatched sacrifices against war on terror. Khattak said the nation will never forget great sacrifices of our innocent kids. The federal minister further said the nation has the ability to defeat terrorism. – December16 renews national commitment, unity against terrorism – Minister of State for Interior Shehryar Khan Afridi says December 16 is the day of renewal of national commitment and unity against the menace of terrorism. In his message on fourth anniversary of Army Public School Peshawar, Afridi said this day reminds us that we have to fight against our enemies with the real spirit of Islam. Shehryar Khan Afridi said Pakistan is united under the leadership of Prime Minister Imran Khan, and our armed forces are united to protect the country. – Chief of Air Staff vows to eliminate terrorism from country – Chief of Air Staff, Air Chief Marshal Mujahid Anwar Khan in his message on the occasion reiterated the commitment to eliminate the terrorism from the country. He said Pakistan Air Force and the entire nation can never forget the great sacrifice of APS martyrs. Meanwhile, a rally was taken out in Khairpur to pay homage to the martyrs of Army Public School Peshawar. It was arranged by the National Peace Committee for Interfaith Harmony organization. The rally was attended by a large number of students, members of various Non-governmental organizations and people from different walks of life.