Another winter storm to pummel eastern US with snow, sleet 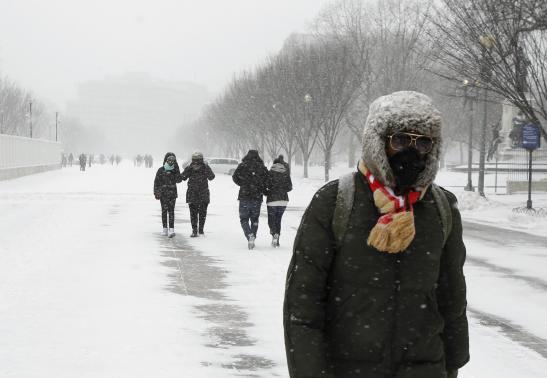 Another winter storm to pummel eastern US with snow, sleet

WASHINGTON (Reuters) - A fresh band of winter weather was churning up the East Coast on Saturday after pummeling parts of the South and Midwest, threatening to pile up more snow in storm-weary Boston and send the region back into a deep freeze. The system cut a curving, 2,000-mile path from southern Missouri to Maine, with a winter storm warning in effect until Sunday for parts of southern Indiana, Ohio, West Virginia and western Pennsylvania, the National Weather Service (NWS) said. In Kentucky and Tennessee, forecasters warned of possible flooding as rain fell on frozen ground. The system was dropping steady snow on Washington and Baltimore as it pushed up the East Coast toward New York City and Boston later Saturday. The snow and sleet will be followed by another blast of bone-chilling cold starting late Sunday. Boston, already hit by 98.7 inches (251 cm) of snow this winter, was due more, said Bob Oravec, a meteorologist with the NWS. "Boston has had a lot of heavy snow this winter and it looks like they are going to get some more," he said. The city's snowfall is about 68 inches (173 cm) above the average yearly total of 31 inches (79 cm), Oravec said. Another blast of Arctic air will follow the storm system, with well-below freezing temperatures in store on Monday for millions of people along the East Coast. The icy conditions had caused scores of traffic accidents across at least a dozen states. Nearly a week of cold and ice has contributed to 18 weather-related fatalities in Tennessee since Monday, according to the Tennessee Emergency Management Agency. They include 9 people who died of hypothermia and five victims of motor-vehicle accidents. In Kentucky, 10 people have died since Monday in weather-related incidents, said Buddy Rogers, a spokesman for Kentucky Emergency Management. Pennsylvania authorities said Friday at least two people had frozen to death outside. In Brooklyn on Friday, temperatures hovered around 4 degrees Fahrenheit (minus 15.6 degrees Celsius), beating the record low of 7 degrees set in 1950, according to NWS records. A 119-year-old record low temperature for Feb. 20 was broken in Washington, with a temperature of 5 degrees Fahrenheit (minus 15 degrees Celsius) recorded at Ronald Reagan Washington National Airport.