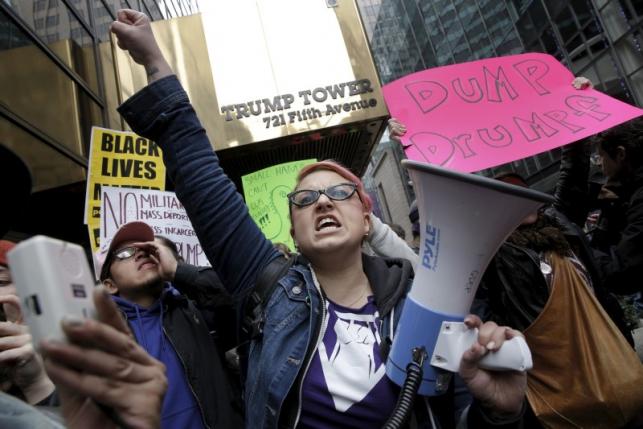 NEW YORK - Demonstrators briefly shut down an Arizona highway leading to a campaign rally for Donald Trump on Saturday while protesters rallied outside of Trump Tower in Manhattan to voice their opposition to the front-runner for the Republican presidential nomination. Television news footage of the demonstration outside Phoenix showed dozens of protesters blocking traffic while holding signs that read "Dump Trump" and "Shut Down Trump." The demonstrators eventually started marching down the highway. Later, some were seen nearing the rally at Fountain Hills, Arizona, before Trump arrived. Three people were arrested, according to police in Maricopa County, where Joe Arpaio, a well-known critic of US immigration policy and an ardent Trump supporter, serves as sheriff. Video posted on news website Arizona Central's Facebook page showed a truck driving through a large group of protesters. Officers from the county police department worked to clear demonstrators from the motorist's path. A woman is seen crying and shouting for officers to take responsibility to stop the vehicle, while a deputy sheriff shrugs at the suggestion. Later at a rally in Tucson, Arizona, Trump said the protests were "disgraceful," and thanked police. "They arrested three people and everybody else left... They left!" Trump said to roaring cheers from the audience. "I love our police, but we should do a little bit more of that, you'd have a lot less protesters, you'd have a lot less agitators," said Trump, who is favored to win his party's nomination for the Nov. 8 presidential election. Several demonstrations also broke out during the later rally, prompting police to escort out a number of people. Footage of the Tucson rally shows an attendee punching and kicking one demonstrator who is being escorted out. The clip also shows police removing the attacker. Trump has come under fire from rivals for fueling unrest with his rhetoric. This week, he warned of riots if Republicans denied him the nomination at the party's convention. In Trump's home city of New York, about 1,000 demonstrators marched from Central Park to Trump Tower, the billionaire developer's signature building on Fifth Avenue. -Reuters