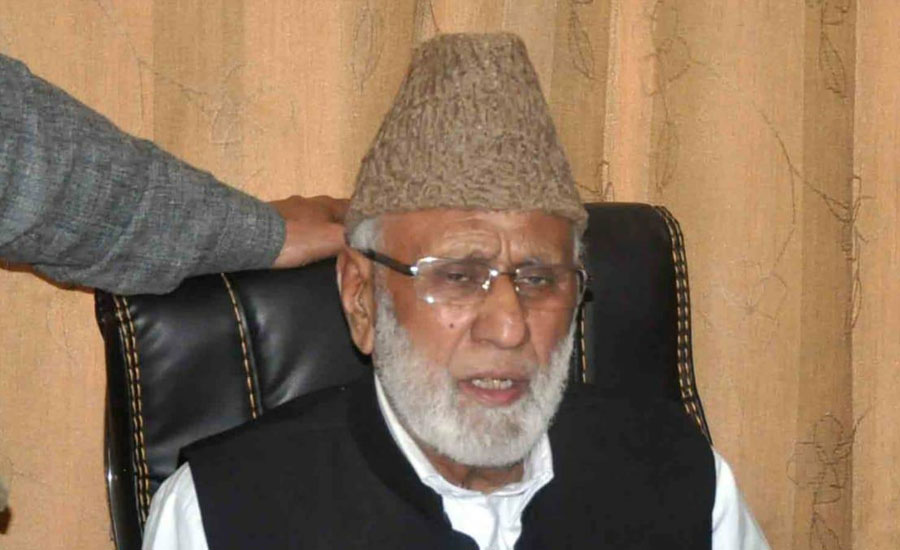 The 80-year-old senior Kashmiri Hurriyat leader was detained under the Public Safety Act (PSA) and passed away after a brief illness at Government Medical College (GMC) in occupied Jammu, the report said.

Sehrai was admitted to GMC on Tuesday after his health started deteriorating at Kot Bhalwal jail. He breathed his last this afternoon.

He was suffering from multiple diseases and was not provided any treatment during his incarceration. His family members were kept unaware of his health condition, according to the report.

The Kashmir freedom struggle leader was arrested on July 12, 2020, by Indian occupational forces from his residence in occupied Srinagar and was lodged at Udhampur Jail.

Sehrai was elected as the Chairman of Tehreek-e-Hurriyat, a constituent of All Parties Hurriyat Conference, which was previously headed by Syed Ali Shah Geelani.

He worked as a lieutenant of Geelani throughout his life and was a member of Jamaat-e-Islami in India-occupied Jammu & Kashmir.

Sehrai was known to be a hardcore freedom fighter and had allowed his son Junaid Sehrai to join the ranks of armed struggle. Junaid was martyred on May 19, 2020, in Srinagar.

The government and the people of Pakistan have expressed deep grief over the demise of senior All Parties Hurriyat Conference leader and Tehreek-e-Hurriyat Jammu and Kashmir Chairman Ashraf Sehrai in Indian custody.

In a statement, the Foreign Office (FO) said that the senior Kashmiri leader was arrested last year on trumped up charges under the draconian Public Safety Act in Indian Illegally Occupied Jammu and Kashmir. The statement said Ashraf Sehrai remained incarcerated in Indian jail under squalid conditions despite serious deterioration of his health and the prevailing COVID-19 crisis.

It said India's blatant attempts to portray the legitimate Kashmiri struggle as "terrorism," and to prosecute its leaders through concocted cases is a clear violation of the UN Charter, UN Security Council and UN General Assembly resolutions, and international human rights and humanitarian law.

The FO said as the COVID-19 situation in India deteriorates, we also remain deeply concerned over the health and safety of the incarcerated Kashmiri leaders as well as other innocent Kashmiris, languishing in jails at undisclosed locations. It said most of these jails are overcrowded and don't have any provision for precautions against the COVID-19.