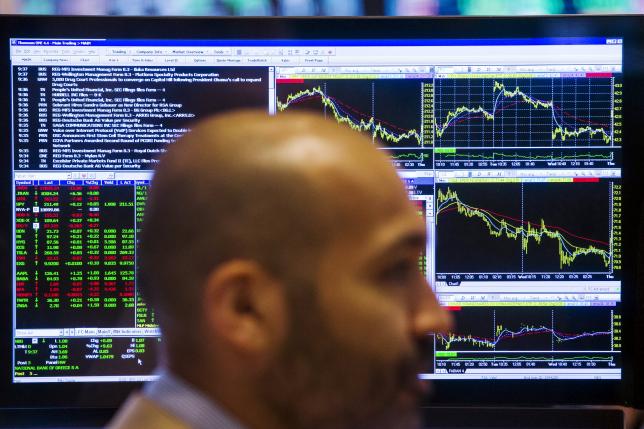 NEW YORK - Wall Street extended losses on Tuesday as investors worried about a rise in interest rates while Apple's shares hit their lowest in over six months. The iPhone maker's shares fell as much as 4.4 percent to $113.25, slipping firmly below their 200-day daily moving average, a key technical level closely watched by traders. The stock was the biggest drag on the three major US indexes. While there was no clear trigger for Apple's selloff, traders said worries over a slowdown in China and skepticism over demand for iPhones were contributing to pressure. "Apple has been the weak sister in the market today. That's having an outsized impact. But if you look at the sectors, most everything is down with the exception of materials," said Alan Gayle, senior investment strategist and director of asset allocation at RidgeWorth Investments in Atlanta, Georgia. Stocks extended losses after Atlanta Federal Reserve President Dennis Lockhart told the Wall Street Journal that September may be the right time for Fed to lift interest rates. At 2:16 pm the Dow Jones industrial average .DJI was down or 0.51 percent at 17,508.5 and the S&P 500 .SPX was down or 0.43 percent at 2,089.09. The Nasdaq Composite .IXIC dropped 0.41 percent to 5,094.48. Eight of the 10 major S&P sectors were lower, with the utilities index's .SPLRCU 1.64 percent decline leading the losers. Soft economic data has prompted some investors to argue that the Fed might hold off on raising rates until December. After the Fed meeting last week, investors had expected a rate increase in September. "The market is getting such a mixed bag of rhetoric from the Fed, it seems like the Fed isn't sure what it's going to do," said Jack Ablin, chief investment officer at BMO Private Bank in Chicago. Dow component Walt Disney (DIS.N), Devon Energy (DVN.N) and Genworth Financial (GNW.N) were among companies scheduled to release results on Tuesday after market close. American International Group (AIG.N) fell 5.2 percent after the insurer's underwriting income fell in almost all of its units, while home and auto insurer Allstate (ALL.N) fell 10.4 percent after its profit missed expectations. Declining issues outnumbered advancing ones on the NYSE by 1.40 to 1. On the Nasdaq, 1,477 issues fell and 1,280 advanced for a 1.15-to-1 ratio favoring decliners. The benchmark S&P 500 index was posting 32 new 52-week highs and 23 new lows; the Nasdaq Composite was recording 86 new highs and 105 new lows. - REUTERS