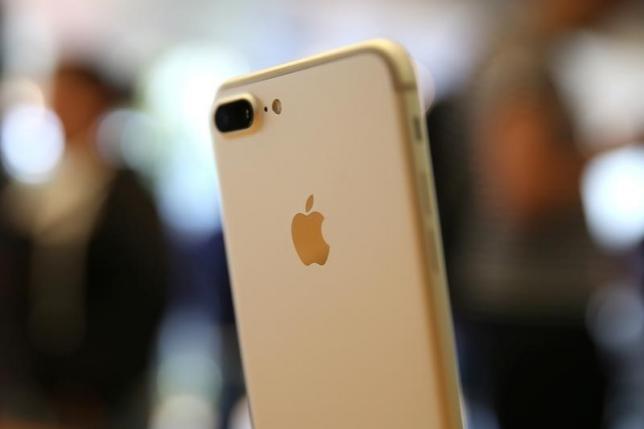 NEW YORK – The first Apple customers in New York City to snap the new iPhone 7 off the shelves cheered as they entered its flagship store on Friday (September 16), flanked by applauding sales staff. "Today is my 23 days outside Apple store here in New York City," said Jaime Gonzalez in line before the store opened. "Last year I did it but then because I didn't pre-order, that's the reason that I didn't went first. There was another lady from Europe who decided to take care of the No. 1 spot. But this is me and now in 2016 it's right to be No. 1 and I am going to be No. 1 this time." "I've been here for a week and a half," said Andreas Francis. "I was trying to get the 7 Plus and the new jet black, but they don't have the 7 Plus or the jet black, so I ended up getting the regular black, then the 7." Initial quantities of the iPhone 7 Plus have sold out globally, supplies of the larger size of Apple's new phone have been exhausted in all shades, and the smaller iPhone 7 has also sold out in the new jet black color, the company said. Customers who enter Apple Stores Friday, when the gadgets hit shelves, will not be able to purchase the sold-out phones on site, but they can continue to place orders for their desired models online, Apple said. The gadgets feature improved cameras and eliminate the traditional headphone jack in favor of new technology. "It's actually the one thing I didn't like actually, because I used to listen to music all day long," said Rinat from Kazakhstan, on the elimination of the traditional headphone jack. "So when they decided to remove it I actually got really sad but I think I got used to it." "It doesn't bother me," said Sulton Zohiriy. "Usually I don't listen to a lot of music. The headphone is like the same but different, different jacks, that's all." The crowds of enthusiasts and overnight campers were smaller than in past years. In part, online pre-ordering has made lines unnecessary for all but diehard fans. "I actually pre-ordered it, so I was only in line for like, 20 minutes, it was super easy," said Paige Hogan, who pre-ordered the 7 Plus. The 5.5-inch iPhone model, known as the Plus, has sold out soon after launch since Apple introduced the size with the iPhone 6 in 2014. Phones in newly released finishes are also typically snapped up quickly by customers eager to showcase the latest iPhone design. –Reuters