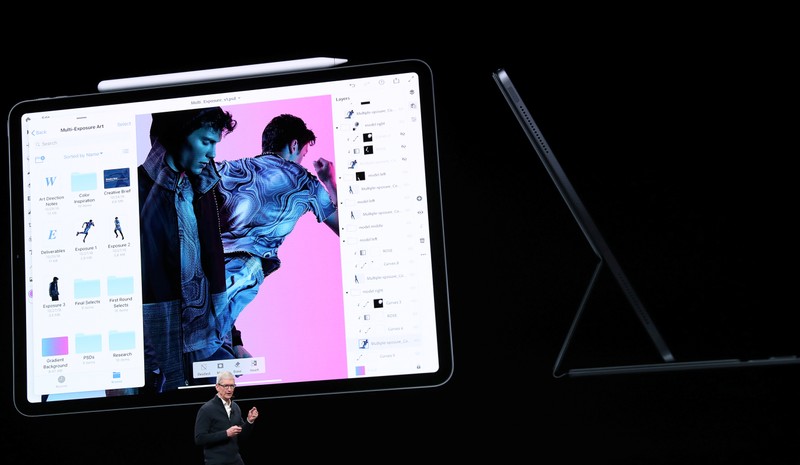 NEW YORK/SAN FRANCISCO (Reuters) - Apple Inc (AAPL.O) refreshed some of its lesser-known products at a New York event on Tuesday, adding iPhone features like facial recognition to the iPad Pro and faster processors and better displays to some Mac computers that had gone years without a major update.
The devices will hit stores on November 7 Counting new iPhones and Apple Watches released last month, Apple will have more than half a dozen new products on shelves for the holiday shopping season, many at higher prices than previous models. The Cupertino, California, company introduced new versions of the iPad Pro, its higher-end tablet that competes with Microsoft Corp’s (MSFT.O) Surface, with thinner bezels and more screen space, along with the face unlock system found on Apple’s newer iPhones. Prices for the iPad Pros increased to $799 and $999 for 11- and 12.9-inch models, though Apple plans to keep an older 10.5-inch version on sale for $649. Apple unveiled the updates at an opera house at the Brooklyn Academy of Music, calling the venue a haven for creative activity. The company has been working to win back professionals like graphic designers targeted by Microsoft with its Surface tablets, which have gained market share this year. Apple also played up software partnerships with Adobe Inc (ADBE.O) and Autodesk Inc (ADSK.O), whose programs will now work on Apple’s iPad Pro. In July Apple reported its worst quarter of Mac sales since 2010, with unit volumes down 13 percent year over year, while iPad unit sales rose only 1 percent from a year earlier. Revenue for both fell 5 percent from the prior year. A new version of the Mac Book Air, originally released in 2011, will feature a higher-resolution display and thinner bezels and start at $1,199, up from $999. “Yes, you save a bit compared to the Mac Book Pro, but that’s not your main reason for buying it,” which is instead power and portability, said Carolina Milanesi, an analyst at Creative Strategies. She said Apple “knows they have a very loyal user base that will be willing to spend the money.” Apple said the Mac Mini, a small desktop customers provide their own display and accessories for, would add processing power and memory capacity and start at $799, also an increase. As with previous models, the new machines rely on processors from Intel Corp (INTC.O), but Apple said an increasing number of security features on the devices are being handled by its own so-called T2 chip. Apple introduced new iPhones and Apple Watches last month, but the older product lines accounted for $45 billion in sales in the most recent fiscal quarter. In comparison, iPhones brought in revenue of $141.3 billion. “They really wanted to show the world they haven’t forgotten about the iPad and the Mac,” said Mika Kitagawa, a senior principal research analyst at Gartner. Some of the recent dip in Mac sales can be explained by timing. Apple had waited until July to release new Macs, instead of June as in previous years. And Mac sales growth has outpaced the PC market, while the iPad has been the most successful tablet in a market that turned out to be smaller than Apple hoped when it released the device in 2010. Microsoft’s Surface line offers a hybrid between a tablet and laptop that runs Microsoft’s full Windows operating system. The iPad Pro runs the same operating system as iPhones. The iPad Pro models have a USB-C port that allows them to work with an external monitor for the first time. When combined with the existing ability for an iPad Pro to work with a keyboard, the new port brings the devices closer to becoming a laptop competitor, Milanesi said. “When people are looking at using this as their main computing device, that’s where you might seem the move toward the 12.9-inch” iPad Pro, she said.