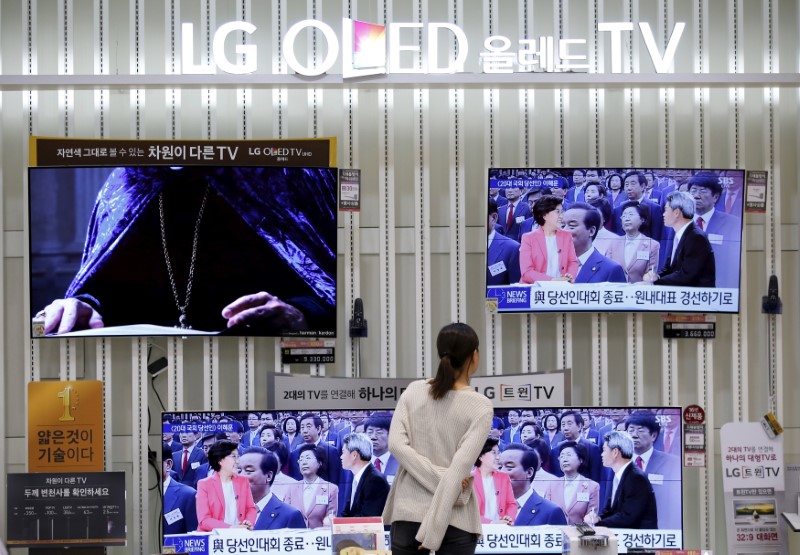 SEOUL (Reuters) - South Korea’s LG Display Co Ltd , a key Apple supplier, slashed its investment plans by $2.7 billion to 2020 citing concern for the global smartphone market, as it posted a second consecutive quarterly loss on sagging panel prices. The cut underscores the bleak outlook for electronics makers and comes a week after another Apple Inc  supplier, Taiwan Semiconductor Manufacturing Co Ltd (TSMC) , also scaled back its revenue and investment estimates. “It is a conservative approach resulting from uncertainty around the mobile market,” Don Kim, LG’s chief finance officer, told an earnings conference call, referring to the capex reduction. LG shares tumbled 7 percent versus the broader market's  0.3 percent fall after it flagged faster-than-expected panel price declines and an uncertain outlook. “Market conditions are turning favorable, but still the unpredictability is high,” Kim added. “Oversupply and asymmetrical competition are unavoidable.” LG said it would trim investment by 3 trillion won ($2.7 billion) from what was planned by 2020, without revealing its total or previous capex targets. It also warned that it could adjust production in South Korea and China in response to trade disputes between Washington and Beijing. The investment cut would not impact plans to “speed up the shift” from LG’s mainstay liquid crystal display (LCD) business toward next-generation organic light-emitting diode (OLED) panels, the company said. Plans to invest about 20 trillion won in OLED panels by 2020 remained unchanged, meaning the cuts would apply mainly to LCD operations. The OLED panel business has yet to make a profit for LG but the company said it would be positive for earnings in the third quarter. LG is focused on investing in OLED technology, with strong positions in large OLED TV screens. The shift comes as its traditional LCD business, which analysts estimate makes up more than 90 percent of LG’s sales, is struggling with falling prices as fast-growing Chinese panel makers ramp up their capacity. Prices of 50-inch LCD panels slid 38 percent in May versus the same month last year, according to South Korean government data. “LCD industry is already in a down-cycle, which will be difficult for LG to get away from, so LG will concentrate more on OLED to differentiate,” said John Ko, analyst at NH Investment & Securities.

LG Display posted an operating loss of 228 billion won ($202.1 million), hit by declining panel prices, compared with an average forecast of a 247 billion won loss derived from a Thomson Reuters survey of 11 analysts. Revenue for the April-June quarter fell 15 percent from a year earlier to 5.6 trillion won. It was LG Display’s second consecutive quarterly loss amid an uncertain time for the global panel industry, with Chinese manufacturers ramping up capacity and a glut of LCD output crimping prices and profit margins. A structural oversupply in panels and fierce competition among display makers were expected to continue, LG said in a statement. China recently approved an LG joint venture to run a new OLED factory there, as the company tries to expand its OLED business towards Chinese TV makers.