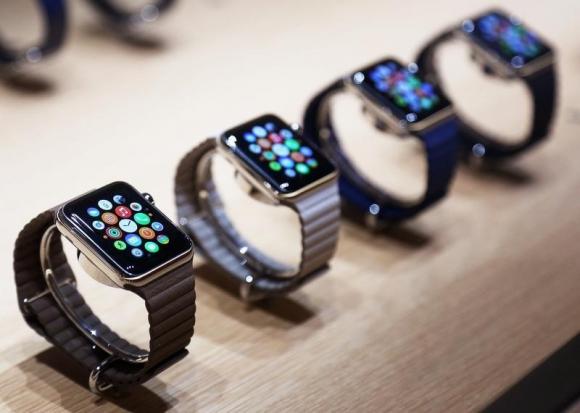 Apple Inc (AAPL.O) had China front and center at the San Francisco launch of its smart Apple Watch, trumpeting a new store in Hangzhou city and demo-ing hit Chinese messaging app WeChat. Also, the new Apple Watch will go on sale in China on April 24, the same day as the United States - unlike the iPhone 6, which hit Chinese stores almost a month after the U.S. But even in this Apple-crazed country - the second-biggest iPhone market after the U.S. - it seems too early to say whether the curved wristpieces from Cupertino will command that must-have cachet for millions of middle-upper-class Chinese. Beyond the is-it-fashion-or-is-it-gadget argument, the Apple Watch carries a hefty price tag in China. The cheapest Sport model will sell at a little below 3,000 yuan ($479), including tax, versus $349 in the United States, while the top-end luxury Edition will set buyers back more than 145,000 yuan ($23,157), against $17,000 in the U.S. That's a lot to pay for a luxury digital product that could be swiftly outdated if Apple does what it does with its smartphones, and brings out a new version each year. There may be other practical drawbacks, too, for Chinese users - from the screen size to the lack of any 'killer app'. "It's almost impossible to send WeChat messages when staring at such a small screen," said Huang Hongwen, 46, a freelancer in Shanghai. "I'd rather buy a traditional luxury watch at the same price," she said of the luxury Edition. Also, Chinese haven't taken to personal health-related consumer technology in the same way as Americans have on wearable devices. "For health-related products in China, most consumers buy them because they're cheap," said Bryan Wang, vice president of Forrester Research in Beijing. "How many are buying those? Not many," he said. Wang predicts that most early adopters of the Watch, likely tech and Apple fans, will opt for the mid-range standard version rather than the Sport or luxury Edition. AUSTERITY CHALLENGE Apple is launching its smart timepiece into a Chinese market where President Xi Jinping's austerity and anti-graft campaign has stigmatized ostentatious gift-giving and conspicuous consumption by officials - who make up a sizeable part of the luxury market. Many recall 'Watch Brother', the online moniker given to a provincial official handed a 14-year jail sentence for corruption in 2013 after pictures surfaced on the Internet of him wearing more than a dozen different expensive watches. Luxury goods sales in mainland China slipped 1 percent last year to 115 billion yuan ($18.7 billion), with watches, menswear and high-end luggage hardest hit, a Bain & Co study showed. But Zhou Ting, the Shanghai-based dean of the Fortune Character Institute, a membership club for Chinese elite, said the new Apple Watch will be a draw for urban Chinese who increasingly shun bejeweled Rolexes or thick gold bracelets as signs of 'tuhao' – or the uncultured rich. "The Chinese wealthy want to show discernment, their taste," said Zhou. "They're constantly searching for the newest experience, something different. Apple can satisfy that." LOCAL SUPPORT Apple laid the groundwork in China prior to launching its Watch, turning to social messaging and entertainment giant Tencent Holdings Ltd (0700.HK) and Alibaba Group Holding Ltd (BABA.N), the world's largest e-commerce company. While Tencent's WeChat messaging service, ubiquitous in China, featured at the San Francisco launch, Alibaba has developed an app for its online marketplace Taobao, and its online payment arm has customized its Alipay Wallet app for the Watch - which will be sold online by both Alibaba's Tmall.com and rival JD.com Inc (JD.O). A spokesman for Baidu Inc (BIDU.O) said the Internet search leader is experimenting with its own potential products for the Apple Watch. Winnie Koo, 26, a secretary from Foshan City in Guangdong province, on a shopping trip to Hong Kong, said she considered the Watch price high, but not unreasonable. "It won't be as commonly used as the iPhone, but I think a lot of people would like it because its innovative functions are quite attractive," she said.