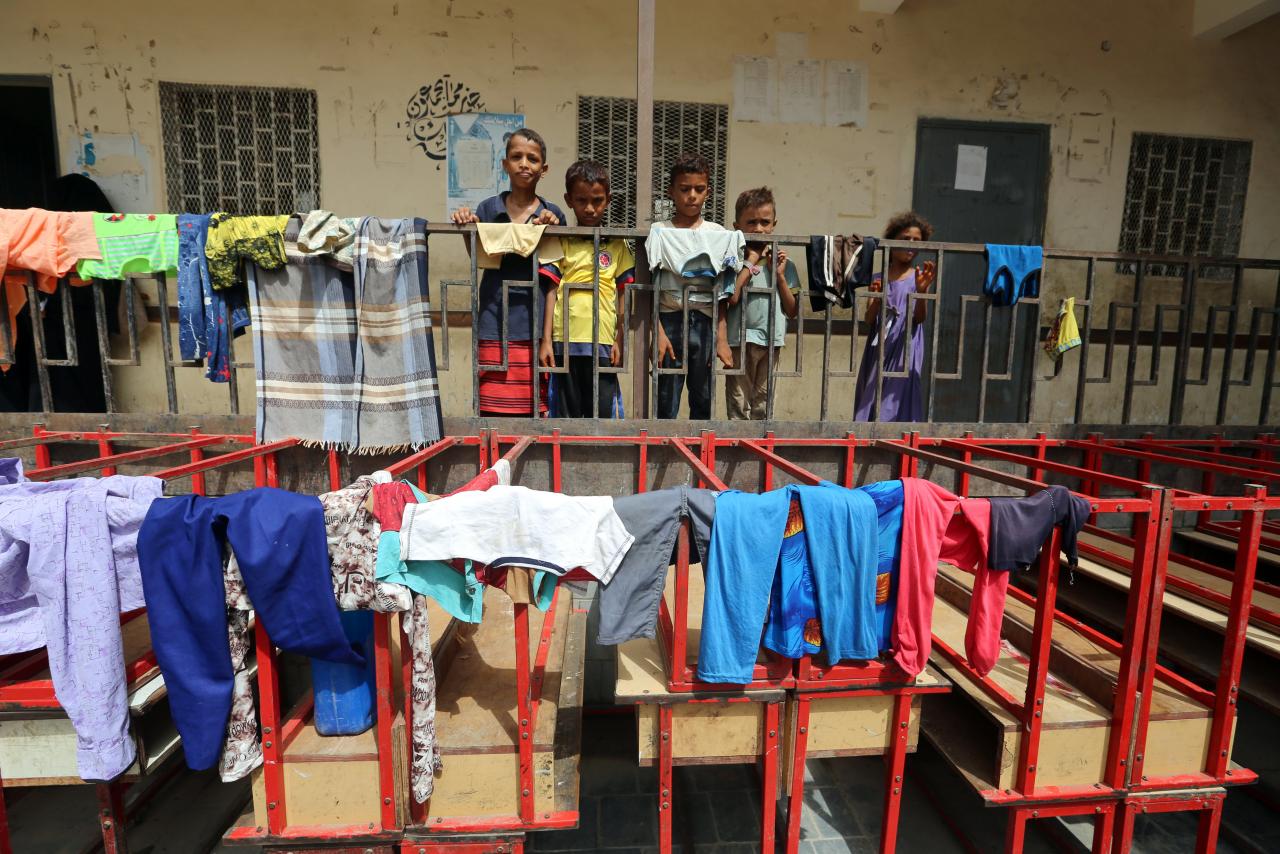 ADEN (Reuters) - Saudi-led coalition aircraft bombarded Houthi fighters holed up at the airport of Yemen’s main port Hodeidah on Monday as a senior alliance official said he hoped U.N. diplomacy could coax the Iran-aligned movement to relinquish the city. There are fears that a prolonged battle for the city, where the Houthis are dug in to protect critical supply lines from the Red Sea to their bastion in the capital Sanaa, could aggravate what is already the world’s most urgent humanitarian crisis. The Western-backed Arab alliance launched an onslaught on Hodeidah six days ago in order to turn the tables in a long stalemated, proxy war between Saudi Arabia and Iran that has compounded instability across the Middle East. The United Arab Emirates, a key component of the coalition, is spearheading the Hodeidah offensive, now focused on the airport of the Red Sea city. On Monday Apache helicopter gunships fired at Houthi snipers and other fighters positioned on the rooftops of schools and homes in the Manzar neighborhood abutting the airport compound, according to local residents. The upsurge in fighting has wounded dozens of civilians and prevented aid organizations from reaching parts of Hodeidah. U.N. human rights chief Zeid Ra’ad al-Hussein voiced concern that the onslaught could endanger millions of civilians. “I emphasize my grave worry regarding the Saudi and Emirati-led coalition’s ongoing attacks in Hodeidah – which could result in enormous civilian casualties and have a disastrous impact on life-saving humanitarian aid to millions of people which comes through the port,” Zeid told the opening of a three-week session of the U.N. Human Rights Council in Geneva on Monday. A senior UAE official said the coalition would take a “calculated and gradual” approach to the battle to minimize risks to civilians. Minister of State for Foreign Affairs Anwar Gargash, speaking to reporters in Dubai, said the alliance was calibrating its military strategy to take heed of the “fragile humanitarian situation”. But Gargash said the Houthis’ days in Hodeidah “are numbered” and he hoped Martin Griffiths, the U.N. special envoy who arrived back in Sanaa on Saturday, could convince them to cede control of the major Red Sea port.

“PULL A RABBIT OUT OF A HAT”

“We are still counting on the U.N. attempt to pull a rabbit out of a hat,” Gargash said. He estimated the number of Houthi fighters in Hodeidah at between 2,000 to 3,000. He declined to reveal the size of coalition forces but said they had “numerical superiority”. The Arab alliance has said it can take Hodeidah quickly enough to avoid interrupting aid and that it would focus on capturing the airport and port and avoid street fighting. But the coalition has not tried to capture such a heavily defended major city since entering the war three years ago, and humanitarian groups fear the battle for Hodeidah could drag out. This would intensify the suffering of civilians who have already endured devastating air strikes, port blockades, hunger and a cholera epidemic. Yehia Tanani said he and his family left Manzar three days ago and walked for 3 km (1.86 miles), hiding behind walls and under trees to avoid air strikes, before finding shelter at a fish farm. Others stayed to care for family members and cattle. “They told us that some humanitarian organizations are going to send buses but then they said no buses could come in or out. So we started walking on foot carrying our children, sitting every while for rest while the Apaches hovered above us. We were scared not knowing if we’d be shot or not,” he said. “Now we’re in this school, no mattresses, no electricity, no water, no bathrooms, nothing. And we have children who need medicine, need food, need anything, but we don’t have anything,” he said, sitting on the floor of an empty classroom of a school being used to house those displaced by the fighting. Children slept on the floor of empty classrooms while others sat forlornly in the courtyard, where a few items of clothing and blankets were draped over balconies and upturned desks. The coalition intervened in Yemen in 2015 to restore the internationally recognized government now in exile, and thwart what Riyadh and Abu Dhabi see as efforts by arch-adversary Iran to dominate the region. Iran denies such accusations. The Houthis rule the most populous areas of chronically unstable Yemen, a poor nation of about 30 million people. The offensive could also have ramifications further afield due to Yemen’s role as a pawn in the struggle for regional dominance between Sunni Muslim Saudi Arabia and Shi’ite Iran. U.S. President Donald Trump’s withdrawal from world powers’ 2015 nuclear deal with Iran and his embrace of nuclear state North Korea have raised pressure on the Islamic Republic to preserve its interests in Yemen, Syria and other Arab states.