Argentina's Di Maria has medical ahead of PSG move 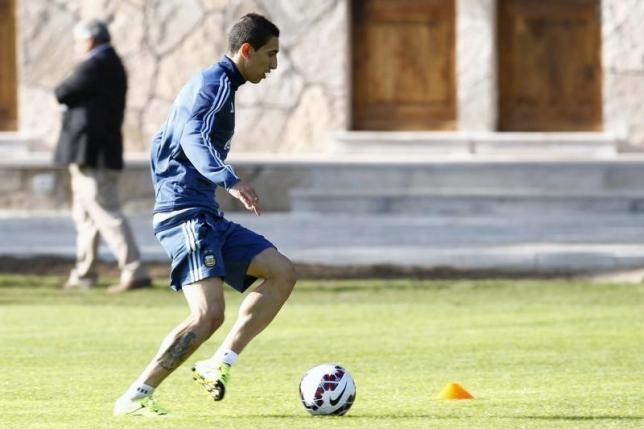 Argentina's Di Maria has medical ahead of PSG move

LONDON - Angel Di Maria has undergone a medical ahead of his move from Manchester United to Paris St Germain, according to the hospital where he is having the tests. The former Real Madrid wide midfielder, whose £59.7 million pounds ($93.28 million) transfer a year ago set a British record, is preparing to join the French champions for a considerably lower fee, according to media reports. "I am very happy to join Paris Saint-Germain," Di Maria told beIN Sports. "What I know about PSG is that they are a team who have won all possible titles in France last season. "I also know that I want to overcome the obstacle that is the quarter-finals of the Champions League," he added, with PSG having failed to get past the last eight of Europe's premier club competition for the last three seasons. Di Maria won the Champions League with Real Madrid in 2014 when they claimed a record-extending 10th European Cup. Aspetar, a specialist sports hospital in Doha, Qatar, announced on its Twitter feed earlier on Tuesday: "#AngelDiMaria in Aspetar, Doha for a medical test ahead of a proposed move from @ManUtd to @PSG_inside." The tweet was accompanied by photographs of the 27-year-old Argentine international at the hospital with officials. Despite a promising start to his time at Old Trafford, Di Maria has failed to win a regular starting place under Manchester United manager Louis van Gaal. United, who have been linked with a move for Pedro, the Barcelona winger, are thought to be prepared to take a heavy loss on Di Maria, with a transfer fee in the region of 44.5 million pounds reported to have been agreed. Di Maria scored the last of his three league goals for the club in October and did not join United's recent pre-season tour of the United States. -Reuters