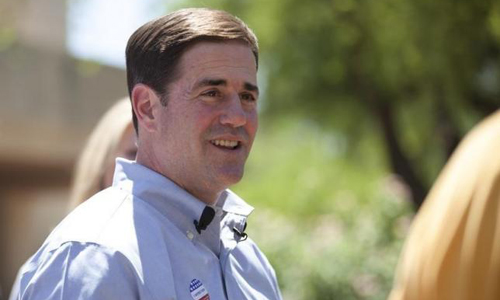 PHOENIX - Arizona Republican Governor Doug Ducey signed a law on Monday that requires doctors to tell women that drug-induced abortions can be reversed and that blocks the purchase of insurance on the Obamacare health exchange that includes abortion coverage. The requirement that patients be told that the effects of abortion pills may be undone by using high doses of a hormone was the most hotly contested provision during legislative debate. Supporters said there was ample evidence the reversal was possible if acted upon quickly, although they provided no peer-reviewed studies in support of their position. Critics called the argument "junk science." The bill cleared the Republican-controlled Legislature last week, largely along party lines. In December, the U.S. Supreme Court blocked Arizona from enforcing a state law that restricted access to abortion-inducing drugs by prohibiting off-label uses of RU-486, known as the "abortion pill." In a statement regarding the bill's provision barring women from buying coverage on the federal healthcare exchange that includes abortion, Ducey said: "The American people overwhelmingly oppose taxpayer funding of abortions, and it's no different in Arizona, where we have long-standing policy against subsidizing them with public dollars." Opponents said there was no proof public dollars had been used for the elective procedures and called the measure an overreach. Bryan Howard, president of Planned Parenthood Advocates of Arizona, said the bill's signing again put Arizona in a bad light for "interfering in the medical decisions of women," and vowed to keep opposing the law through "all of our options, including litigation." Supporters of the measure, which exempts cases of incest, rape and life-saving situations, said the ban was needed because many individuals insured through the federally run exchange set up under the Affordable Care Act, known as Obamacare, received government subsidies. "Countless more lives will be saved, and women spared a lifetime of regret," said Cathi Herrod, president of the conservative Center for Arizona Policy. - REUTERS