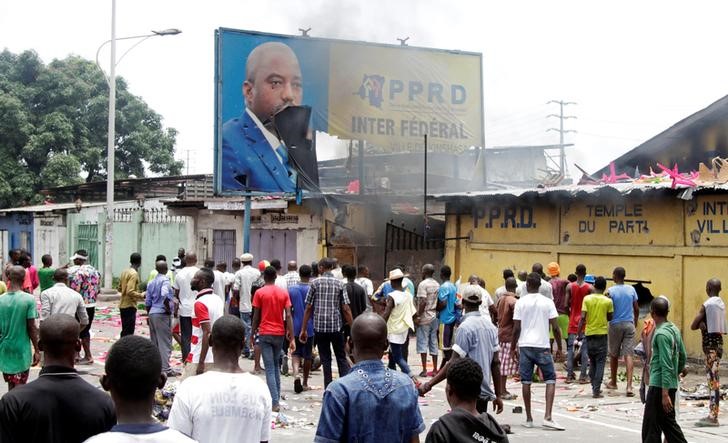 KINSHASA - Armed men set fire to the headquarters of one of Democratic Republic of Congo's main opposition parties early on Tuesday, a day after violent protests, the organisation said, leaving at least two people dead inside. The uniformed attackers struck the morning after security forces had clashed with party members and other opposition activists protesting against what they say is a bid by President Joseph Kabila to extend his rule over Africa's top copper producer. Two charred bodies could be seen inside the offices of the Union for Democracy and Social Progress (UDPS) in Kinshasa on Tuesday, next to empty gasoline cans strewn across the floor, a Reuters witness said. "We were sleeping when men came and forced in the door ... I saw men in military uniform," said Jean Toumba, a UDPS member who had been sleeping in the building. "They threw petrol and set fire to the office. I ran out to hide," he told Reuters. The armed men burst in to the office in the capital's Limete neighbourhood at around 3 a.m. (0300 British time), he added. Witnesses had initially said three bodies were inside the building. However one was found to be alive, though he was badly burnt. Another person was also injured in the fire. The UDPS is led by Etienne Tshisekedi, an opposition stalwart who lost against Kabila in a 2011 presidential run-off. The party is one of the main political groupings calling for Kabila to step down when his term expires in December.