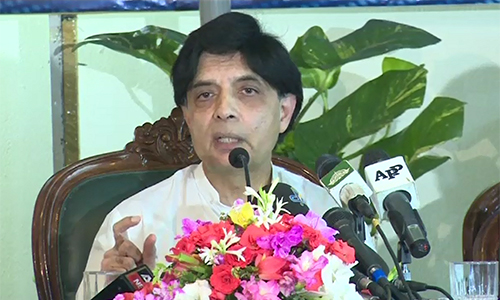 ISLAMABAD (92 News) – Interior Minister C Nisar has said that the army, government and nation have full confidence in COAS General Raheel Sharif. Speaking at the inaugural ceremony of the NADRA’s on-line application form system on Monday, he said that it is wrong to term the sit-in a conspiracy against the army leadership. “The army abides by discipline and it is impossible for a few officers to change the COAS,” he said. The minister said that it is not easy to run the government and administrative affairs in Pakistan. “I can write a book on the sit-in, but it is not fair to wash dirty clothes at a crossroads. Conspiracies against political figures are often discussed, but the army has never become part of any such disputes,” he maintained. He said that they are at war and the enemy is hiding in streets and bazaars. “It’s harmful for the country to issue statements against the army,” he said. Ch Nisar said that Pak Army is the best army in the world. "Pakistan Army is the only army in the world that won the guerrilla war." He said that hundreds of foreigners were issued CNICs in the past. “Twenty-six in 2011, 493 in 2012, 6,000 in 2013 and 60,000 CNICs have been blocked this year,” he said.