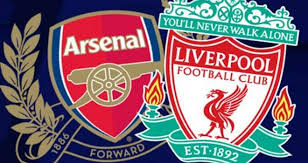 LONDON - The Premier League bursts back into life after the international break this weekend with Arsenal and Liverpool clashing in a potential FA Cup final dress rehearsal in the early kick-off at the Emirates on Saturday. Although the two teams are the favourites to meet in the Cup final at Wembley at the end of May, of more immediate concern to both will be the three points at stake on Saturday. Victory for Arsenal would maintain their unlikely late challenge for the title, while a Liverpool win would rekindle their hopes of a top-four finish after their last match before the break ended in a 2-1 home defeat by Manchester United. Arsenal have won their last six league matches and halved the gap on leaders Chelsea from 14 points on Feb. 10 to seven now and a win for the Gunners would lift them into second place, at least until Manchester City play at Crystal Palace on Monday. Chelsea, leaders since late August, host Stoke City, managed by the London club's ex-striker Mark Hughes, in Saturday's late match and anything other than a home win would be a major upset. Chelsea have played 29 matches, one fewer than all of the chasing pack, and are on 67 points, with second-placed City on 61, Arsenal with 60 and Manchester United on 59. IMPROVING VILLA On Saturday, United host Aston Villa, who have looked a better side since Tim Sherwood took over as manager from Paul Lambert six weeks ago but are still involved in the relegation fight. United should chalk up a fifth successive league win. While Liverpool, who are fifth on 54 points, will be hoping to stay in touch with the leading quartet, both Southampton and Totttenham will look to overtake them if they should slip up. Saints and Spurs are both a point behind Liverpool with the former travelling to erratic Everton and the latter visiting relegation-threatened Burnley. Spurs had four players -- Harry Kane, Ryan Mason, Kyle Walker and goalscorer Andros Townsend -- in the England team that drew 1-1 with Italy on Tuesday. They will be hoping for a third win in four over Burnley this season after beating them in an FA Cup third round replay in January. Kane, meanwhile, who has scored 29 goals for Tottenham this season including a hat-trick against Leicester City last time out, needs one more goal to become the first Spurs player since Gary Lineker in 1991-92 to hit 30 goals in a season.