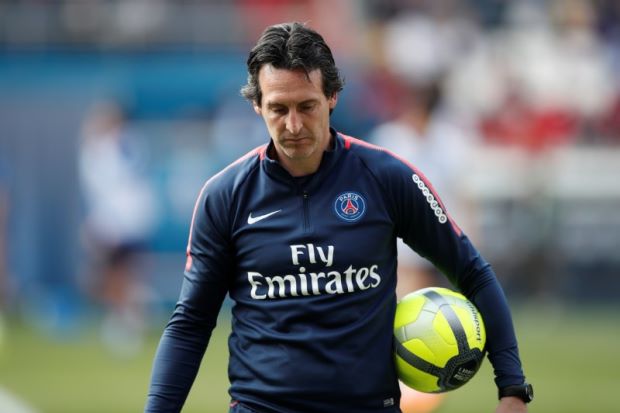 LONDON (Reuters) - Arsenal could add to their squad before the Premier League season starts but only if an exceptional player becomes available, manager Unai Emery said on Thursday as he declared himself happy with the club’s transfer business.
Arsenal continued their busy close season activity by signing midfielder Matteo Guendouzi from French Ligue 2 side Lorient for an undisclosed fee on Wednesday. France youth international Guendouzi is Emery’s fifth signing and follows Switzerland full back Stephan Lichtsteiner, Greece defender Sokratis Papastathopoulos, German keeper Bernd Leno and Uruguay midfielder Lucas Torreira. “Normally in my career, the big clubs don’t close the (door) or the moment to sign a new player,” Emery told a news conference ahead of their first pre-season game this weekend. “Today, we are OK. Maybe we can bring in one if there’s a very good possibility for them to help us, but the club has done a great job of signing new players and I am happy.” Arsenal finished a disappointing sixth last season and missed out on a Champions League qualifying spot, with manager Arsene Wenger leaving after almost 22 years at the club. They face a tough Premier League opener against champions Manchester City on Aug. 12 with Emery, who left French title holders Paris St Germain at the end of last season, trying to build a team that can compete for a top-four finish. “We signed the players who we needed and only if one player is a big opportunity for us will we sign them,” he added. “Normally, we are thinking about the young players, the possibility of them staying with us or going to play on loan at another team. We are also thinking about the players who were with us last year and whether we need them to stay with us. “At the moment, I think the squad is complete. We will only sign another player if there is an opportunity to bring in that one player, or two players. We will only sign a player in the next month if he’s a big opportunity.” Emery also said he wanted five captains after German skipper Per Mertesacker gave up the armband when he retired at the end of last season. Laurent Koscielny is the Arsenal vice-captain but the Frenchman is recovering from a long-term injury. “...My first idea is to have five captains in the team. But at the moment, I don’t know the names. I need to know more and also, firstly, Koscielny is the first captain now and for me, I have respect for that,” the Spaniard said. “Then, we are looking at, looking for, who are the players whose personality is the best in the dressing room. We want to keep the respect for these players and to find the captain and choose very well the best player for that.”