Arsenal get morale-boosting win over Chelsea 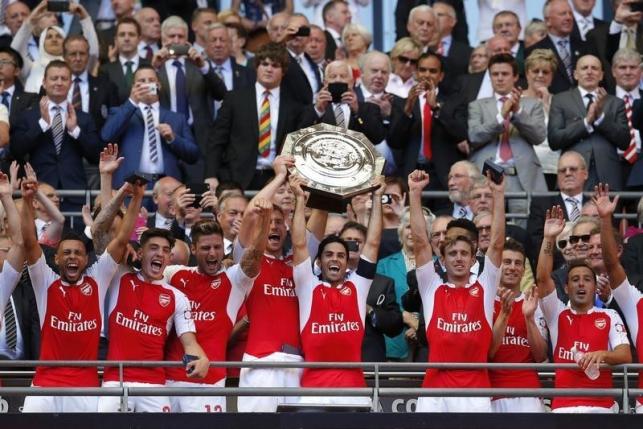 Arsenal get morale-boosting win over Chelsea

LONDON - FA Cup winners Arsenal beat champions Chelsea 1-0 in England's Community Shield season curtain-raiser at Wembley on Sunday to end a long wait for victory over their London rivals. Alex Oxlade-Chamberlain's brilliant goal after 24 minutes settled a match played in warm sunshine. The 21-year-old received a pass from Theo Walcott and cut inside Chelsea defender Cesar Azpilicueta before firing an unstoppable shot into the top corner of Thibaut Courtois' goal. It was the first time in 14 attempts that Arsenal manager Arsene Wenger had got the better of Chelsea coach Jose Mourinho and the result offered hope to Chelsea's title rivals hat the champions might not have such an easy time this year. Chelsea won the title in May with a commanding lead of eight points over second-placed Manchester City and they are the bookies' favourites to retain the trophy in the new season which kicks off on Saturday. Arsenal dominated the first half and were rewarded with Oxlade-Chamberlain's superb goal. Chelsea sought to up their sluggish tempo in the second half, bringing on new loan signing Radamael Falcao for striker Loic Remy and replacing Ramires with Brazilian compatriot Oscar. Goalkeeper Petr Cech, who made nearly 500 appearances for Chelsea before signing for Arsenal and received a rousing reception from both sets of fans before the game, saved impressively from an Oscar free kick in the 69th minute. Chelsea pressed for an equaliser but looked short of menace in front of goal with Spain striker Diego Costa sidelined by injury. Belgium winger Eden Hazard blazed over from an angle half way through the second half, an uncharacteristic miss for the player voted England's player of the year last season. Arsenal rested key players including striker Alexis Sanchez who returned to training later than most of his team mates after helping Chile to win Latin America's Copa America. - Reuters