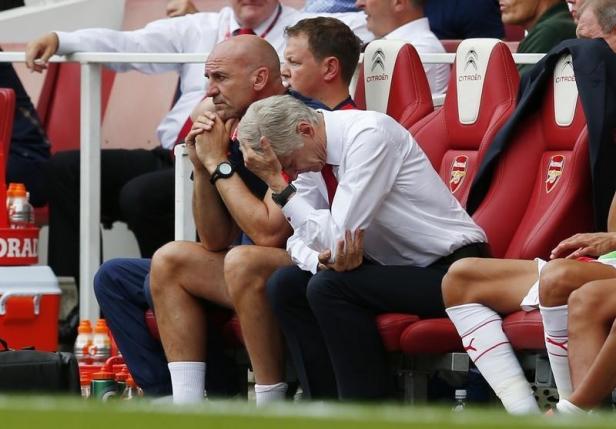 LONDON - West Ham United capitalised on mistakes by new Arsenal new goalkeeper Petr Cech to secure a surprise 2-0 Premier League victory at the Emirates and leave the Gunners deflated on Sunday. Philippe Coutinho's stunning late strike gave Liverpool a 1-0 victory at Stoke City to avenge their 6-1 defeat at the Britannia Stadium on the final day of last season. Steve McClaren's reign as Newcastle United manager began with a 2-2 home draw against Southampton. Arsenal, full of opening-weekend optimism, knew the importance of a good start to the season after five draws and a defeat in the first eight games of the last campaign left them too far behind eventual champions Chelsea. Victory over Chelsea in the Community Shield fuelled hopes that Arsene Wenger's side could improve on last season's third place but goals from Cheikhou Kouyate and Mauro Zarate earned West Ham victory in Slaven Bilic's first league game in charge. Arsenal were booed off at the final whistle with Cech culpable in both West Ham goals. The former Chelsea keeper was signed during the close season to shore Arsenal up defensively but the experienced Czech had a day to forget in the north London sunshine. Just before halftime he came flying out to punch Dimitri Payet's free kick but was beaten to the ball by the head of Kouyate. Twelve minutes after the restart Zarate's low strike sneaked past him at the near post. West Ham, who gave a Premier League debut to 16-year-old midfielder Reece Oxford, were deserved winners. "We are all very pleased and it is great start for us. Not only for the three points but points against a team that are the title contenders," former West Ham player Bilic said. "If you add to that a London derby, it makes it an even bigger win. This is very special." Wenger described the result as an accident. "We know fitness-wise West Ham were ahead of us, they had already played competitive games (in the Europa League). You never get the same intensity," the Frenchman said. "Today we have been hurt mentally and it is a good opportunity to respond." COUTINHO MAGIC Humiliated by Mark Hughes's side in their last Premier League outing, Liverpool's return to Stoke was a much calmer affair. Brendan Rodgers came under fire from fans after finishing sixth last term and the Liverpool boss invested heavily in a wealth of attacking options tasked with increasing the number of goals scored from last season's paltry 52. Striker Christian Benteke, the pick of the bunch as a 32.5 million-pounds ($50.4 million) signing from Aston Villa, was starved of service but Coutinho came to Liverpool's rescue in a match of few chances. The little Brazilian eased past two Stoke players in the 86th minute before unleashing an unstoppable drive past the Stoke goalkeeper Jack Butland. MISSING KOEMAN As Newcastle boss McClaren stepped foot in a dugout as a Premier League manager for the first time since 2006, his opposite number Ronald Koeman was nowhere to be seen after undergoing an operation for a ruptured Achilles this week. The Saints seemed unaffected by their manager's absence and took the lead in the 24th minute when Italian striker Graziano Pelle rose highest to plant a header past Tim Krul but Newcastle equalised just before halftime through Papiss Cisse. New signing Georginio Wijnaldum headed in Gabriel Obertan's perfectly-weighted cross to swing the advantage in Newcastle's favour but Shane Long equalised in the 79th minute with another headed goal. - Reuters