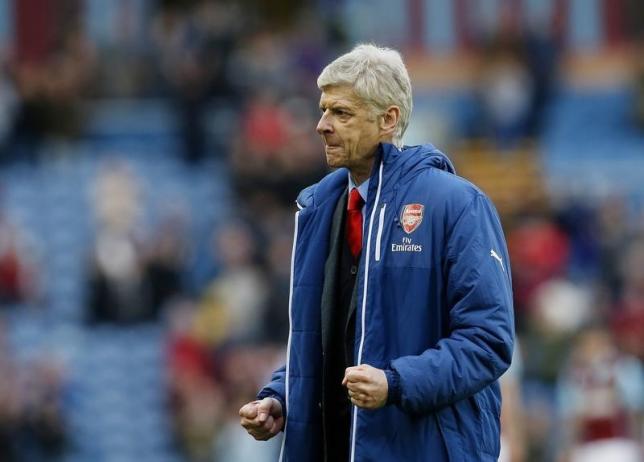 LONDON - Arsenal's eight-match winning streak in the Premier League has taken even manager Arsene Wenger by surprise, according to the Frenchman whose side retain an outside chance of winning the title. "I always hope to get the best out of my team, but no manager in the world if he is serious can predict a run like this," Wenger told Arsenal's website. "In the Premier League it's very difficult to predict." Wenger has once again come under fire this season, with fans frustrated by Arsenal's failure to mount a serious title challenge and another last-16 exit in the Champions League. However, with an FA Cup semi-final this weekend and still the chance to chase down Chelsea in the table, Wenger's position at Arsenal is again looking secure. Arsenal have won 16 of 18 games in all competitions and Wenger believes the change in fortune is down to him finally having a relatively injury-free squad. "It's down to the quality and the attitude of the team, the quality of the spirit we have in the side," he said. "We prepare (well), we prepare and contribute to our success, that is for sure. What people forgot is that we had big players out for four months this season. "Six or seven players from the squad completely out. So that made a big difference. "We have a better balance in the team and some players have made it like (Francis) Coquelin, who contributes to the balance of the team. Hector Bellerin as well has come into the team. "And big players like (Laurent) Koscielny, like (Mesut) Ozil, like (Olivier) Giroud have been out four months in the season -- four months the three together! "I have a quality bench and we even have quality players at home like Chamberlain, Arteta, Wilshere. I didn't even try to play Debuchy. We have a big squad and I think we have quality. "Let's see how we finish the season and after see how we do next season." Arsenal face Championship side Reading in the FA Cup semi-final this weekend and host Chelsea the following week. - Reuters