ISLAMABAD 992 News) The Pakistan Tehreek-e-Insaf (PTI) on Monday appointed Arshad Dad as party’s secretary general a few days after the court rejected review petition against disqualification of Jahangir Tareen. A notification was issued for the appointment of Dad as the new secretary general. Arshad Dad was previously serving as PTI’s additional secretary general until Tareen was overseeing the party matters. 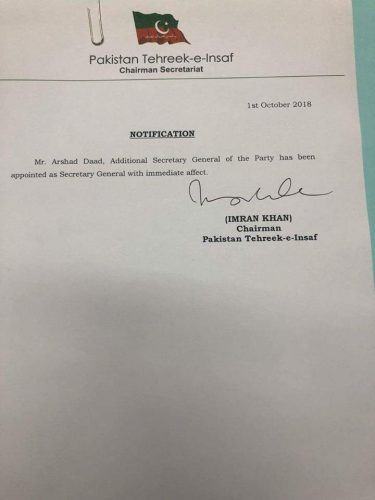 On December 15,2017, a three-judge bench headed by Chief Justice of Pakistan Mian Saqib Nisar, disqualified PTI leader Tareen under Article 62 (1)(f) of the Constitution for deliberately submitting a false statement in the Supreme Court to conceal his property in the United Kingdom. The Supreme Court on Sep 27 rejected review petition of Pakistan Tehreek-e-Insaf leader Jahangir Tareen, against his disqualification. The counsel of Tareen submitted the trust deed that was earlier sought by the court.