As an instant target for foes, Clinton may struggle to get message heard 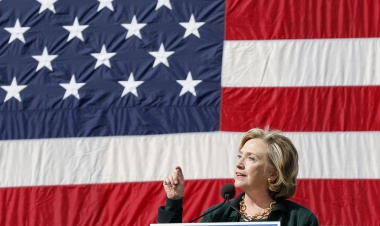 As an instant target for foes, Clinton may struggle to get message heard

WASHINGTON - Hillary Clinton entered the 2016 race for the White House on Sunday and the good news for her is that there are few serious contenders to challenge her for the Democratic nomination. The bad news is that there are few serious contenders to challenge her for the Democratic nomination. Because of her global profile and the lack of other prominent Democrats in the field, Clinton enters the race in a position that is perhaps unmatched in modern US presidential politics. While her grip on her party’s nomination seems commanding, it also makes her a singular target for a bevy of Republican candidates who now share a common enemy. “All of them will be trying to prove they’re the most anti-Hillary, the toughest against her,” said Democratic strategist Joe Trippi, who was behind former Vermont Governor Howard Dean’s insurgent bid against favorite John Kerry in 2004. “They’ll all be taking shots.” One central challenge for Clinton’s nascent presidential campaign therefore will lie in sustaining momentum and generating positive buzz while under constant siege from Republican candidates, their more unruly political action committees, progressives who feel she is not liberal enough, and the media. Republican contenders Jeb Bush, the former Florida governor, and Senator Rand Paul of Kentucky wasted no time on Sunday criticizing Clinton. Following the video announcement of her candidacy, Bush tweeted: “We must do better than Hillary.” On the left, Bill de Blasio, the progressive mayor of New York, was noncommittal on endorsing her candidacy, saying on NBC’s Meet the Press that he wants to hear Clinton’s vision for the country. The risk is that Clinton’s campaign will be so busy responding to attacks on every front that it could have difficulty spawning positive coverage. “Absolutely she’s going to be on defense, and our goal is going to keep her on defense,” said Jeff Bechdel, a spokesman for the anti-Clinton PAC America Rising, which is devoted to carpet-bombing the public and press with criticism of the candidate. IT'S THE POLICY, STUPID One way to beat back the tide of negativity, some strategists told Reuters, will be for Clinton to use her gravitas as a former secretary of state to announce policy initiatives on a grand scale. They argued that her background would give her proposals a weight that candidates like Republican senators Ted Cruz and Marco Rubio can’t match. "One of the best tools they’ve got is her ability to project policy at an almost-presidential level," Trippi said of Clinton, who has been on the global stage for decades. Clinton cast herself on Sunday as a champion of everyday Americans still struggling to recover from the 2008 recession, although she did not offer any specific policy prescriptions. Tad Devine, who advised Kerry’s 2004 bid as well as Al Gore in 2000, said there were opportunities for Clinton to make an impact and generate buzz in areas such as climate change and campaign-finance reform, as well as in the economic arena. “The best way to create positive news is to introduce new policy,” Devine said. “Winning campaigns are about the future. The best way to get to the future is to talk about policy proposals that can be introduced and implemented if she is president.” Clinton's campaign chairman, John Podesta, said in a Tweet that Clinton's top policy priorities would be "helping working families succeed" and tackling climate change. "CANDIDATE OF IDEAS" Ari Fleischer, a former White House press secretary under George W. Bush, echoed Devine, saying that Clinton needs to focus less on her qualifications and more on new initiatives. “The resume is money in the bank. She can’t add to it,” Fleischer said. “The upside for her is to be the candidate of ideas and specifics.” Bush might provide the best comparison to Clinton’s position. He built a juggernaut in 1999 that quickly leveled almost the entire Republican field, leaving more time for big-ticket policy events. Fleischer said the campaign took advantage: A speech in Iowa unveiling his tax-cut plan became front-page news, as did his proposal to reform Social Security. Clinton has an experienced hand to guide her. Clinton’s new communications director, Jennifer Palmieri, served in a similar role in the White House under President BarackObama, where she specialized in trying to drive media coverage through policy roll-outs. But as with most things surrounding Clinton’s candidacy, it’s never that simple. All signs point to this iteration of her campaign wanting initially to keep events on a small, relatable scale. Her new campaign website shows Clinton sitting at a small table, sharing coffee with two senior citizens. A presidential-style address on, say, income inequality with a large crowd as a backdrop would fly in the face of that strategy. That tension may be one her campaign will have to resolve as it moves forward. There is evidence that Clinton’s standing with voters may already be suffering from Republican attacks and media scrutiny. In mid-January of this year, a Reuters/Ipsos tracking poll had Clinton as the first choice of 50 percent of Democrats. As of last week, that number had dropped to 38 percent. A few Democrats - former Maryland Governor Martin O’Malley, former Senator Jim Webb of Virginia, and former Rhode Island Governor Lincoln Chaffee - have suggested they will take Clinton on in the Democratic primary, but none of them have the name recognition, the financial resources, or the campaign apparatus to mount a serious challenge to her — at least for now. - Reuters