As Hyundai struggles, its labour union shows signs of softening 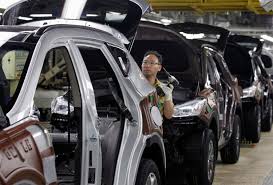 As Hyundai struggles, its labour union shows signs of softening

SEOUL (Reuters) - When workers at South Korea’s Hyundai Motor (005380.KS) went on strike last year, the stoppage lasted 24 days, triggered months of negotiations and netted them their smallest raise in nearly a decade.
This week, after just two days on strike, their powerful union agreed to a deal before the summer holidays, the first time in eight years that has happened. The agreement gives workers a smaller raise than last year’s $14,000 in bonuses and wage increases, union officials said, declining to provide details. It had sought a 5.3 percent increase in wages, a request it reduced to 2.1 percent; inflation in South Korea is about 1.9 percent. Those relatively small gains, and the speed to which they were agreed, are signs that the union may be softening its stance amid growing criticism, falling profits, the near bankruptcy of GM Korea and potential U.S. tariffs. Union members endorsed the deal late Thursday, just before the automaker reported its second-worst quarterly net profit since 2012. “We’re fed up with strikes and feeling a crisis too,” a Hyundai worker in its sprawling Ulsan factory complex, the world’s biggest automaking facility, told Reuters, citing GM Korea’s recent wage deal and trade disputes with Washington. This year, General Motors’ (GM.N) South Korean unit shut down one of its four plants, cut jobs and agreed with its union to freeze wages, skip bonuses and trim benefits to stem mounting losses. Hyundai chief executive Ha Eon-tae said during negotiations that a 25 percent tariff - a possibility as the U.S. escalates trade pressures globally - would be a “nuclear bomb.” He said it would lead vehicle prices to increase as much as $5,500 each and wipe out 70 percent of the company’s revenue, according to union notes seen by Reuters. More than 70 percent of Hyundai’s workers are unionised. By contrast, the union participation rate in South Korea is only about 10 percent, the second-lowest after Turkey among member countries of the Organization for Economic Co-operation and Development. The union’s 50,000 members helped drive Hyundai’s rapid growth in the 2000s, when the company earned record profits and had an operating margin above 10 percent - the industry’s highest. The union, which has staged strikes in all but four of the 30 years since it was created, points to that performance in negotiating for generous wages and benefits. But the inflation-beating wage increases over the years have widened the pay gap with non-unionised workers and subcontractors. Union members’ annual average wage was 92 million won ($82,000) in 2017, among the highest in the global auto industry. When they launch strikes, the union’s office is bombarded with calls from businesses, conservative groups and others criticising them for taking for granted their high wages, benefits and job security, some union members say. South Korean news media also often slam the country’s auto unions for being “aristocrat unions.” “We did our best to break through the social isolation the labour union faces and reach a deal before summer holidays,” union leader Ha Bu-young said in a newsletter after the deal. At Hyundai’s Ulsan factory, a leaflet distributed by management in March ahead of wage talks warned of a GM Korea-like crisis, citing Hyundai’s high costs and low productivity. Hyundai claimed that the productivity of its South Korean factories is only 60 percent of those overseas. “The crisis of the South Korea’s auto industry… it is not just the problem of GM Korea. Are we assured about the future of Hyundai Motor?” the leaflet said.

Another Hyundai employee, who works at the No.3 plant in Ulsan, said he will be forced to take a two-week summer holiday this month, instead of the company’s standard one-week holiday, because of slow demand for the Elantra sedan in South Korea and the United States. “We have no choice but to change. If we don’t change, we will not able to survive,” another Hyundai worker said. A lack of SUV models in the United States, a diplomatic row between South Korea and China last year and U.S. threats to impose tariffs on auto imports pose other problems to Hyundai’s high manufacturing costs in South Korea. In another memo, dated June 21, Hyundai CEO Ha wrote: “When we look back enormous production and wage losses we have had, it may not be just me who has doubts about whether all those sacrifices were worth it. I am strongly committed to changing our consuming and routine negotiating culture.” But workers say that even if their union softens its position, it needs to stay strong in fighting against the country’s powerful chaebol, which imposed massive job cuts during the 1997-1998 Asian financial crisis. “It has to be powerful to give protection to its workers. We are concerned that the company will not protect us (when things go wrong),” the second worker said.