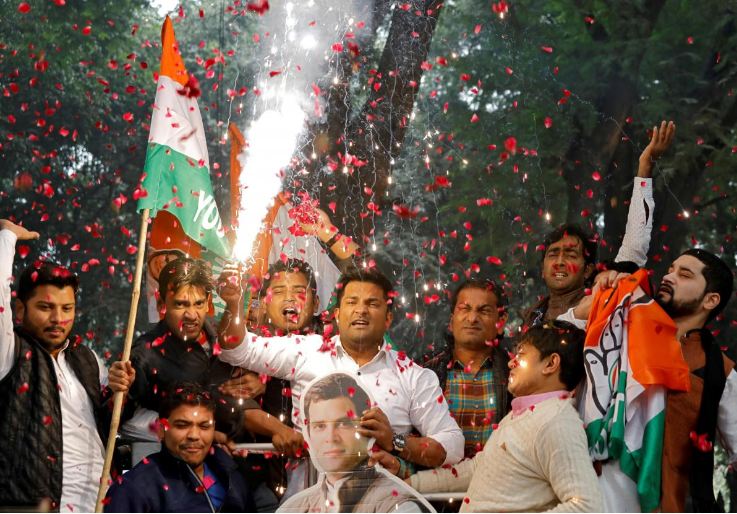 NEW DELHI (Reuters) - After suffering an electoral thrashing at the hands of Prime Minister Narendra Modi’s Hindu nationalist Bharatiya Janata Party in 2014, small regional and caste-based parties are back in the reckoning months ahead of the next general election. Losses for Modi’s BJP announced in three key states on Tuesday - blamed mainly on rural anger at weak farm prices and sluggish job creation - have opened the door for new and old alliances between the main opposition Congress and smaller parties bitterly opposed to Modi. Most political strategists still expect the BJP to cling on to national power, albeit with a smaller majority, in an election due by May next year. But they also acknowledge this week’s results in three big heartland states have opened up the outside possibility that Congress could stitch together enough support from smaller parties to form the next government. “At the central level, Prime Minister Modi maintains overwhelming popularity over his competitors, and anecdotal evidence suggests BJP has more boots on the ground than other parties to mobilise during its re-election campaign,” Nomura said in a research note. “However, we do expect talks of a grand (opposition) coalition to raise political uncertainty into the 2019 general elections.” A Congress-led coalition involving multiple smaller parties could find it difficult to govern, and make economic reforms particularly contentious. That is because almost all of the smaller parties have their own local or community-based agendas that may not fit with many national policies. For investors that could mean dealing with more policy uncertainty or even gridlock over some critical issues. Adding to that uncertainty, Congress says it will not announce that its president, Rahul Gandhi, would be its prime ministerial candidate in the event it could put together a coalition, as it seeks to respect the aspirations of its alliance partners. Many of the regional leaders are highly ambitious with years of experience in office. Gandhi, although heir to the Nehru-Gandhi dynasty that has dominated Indian politics since independence, has never held any government position.

One of the smaller parties, the Bahujan Samaj Party (BSP) established in 1984 to mainly represent people in the lowest strata of India’s ancient caste hierarchy, said on Wednesday it would support Congress in forming governments in the big states of Madhya Pradesh and Rajasthan, where it fell just short of a majority. Congress has the numbers to form a government on its own in the central state of Chhattisgarh, while regional parties won two other states that also went to the polls in recent weeks. “We fought these state elections mainly to dethrone the BJP. Unfortunately we were not able to do that on our own,” BSP President Mayawati, who goes by only one name, told reporters. “Despite having some differences with the Congress party, we have decided to support them to keep the BJP out. Our people should give their best, starting now, for a good showing in the next general election.” Another BSP leader, M.H. Khan, told Reuters the party hoped to fight the 2019 general election alongside Congress and other parties, and then see Mayawati become India’s next prime minister. In the 2014 general election, the BJP won 282, or nearly 53 percent, of the 543 seats in the lower house of parliament - the biggest majority an Indian government has had in three decades. Meanwhile, the BSP drew a blank, after winning as many as 21 seats in 2009. Many other small parties, such as the Samajwadi Party (SP) and Nationalist Congress Party, also fared poorly as a Modi’s development-for-all pitch swept the country. SP spokesman Ghanshyam Tiwari said the party hoped to easily surpass its tally of five parliamentary seats next year by forming a “formidable alliance to ensure that we have a better agenda to work on”.

On Monday, a day before the state election results were announced, Congress led a meeting of nearly two dozen opposition parties who pledged to oust the BJP government and “confront and defeat the forces that are subverting our constitution and making a mockery of our democracy”. One of the leaders who attended was Mamata Banerjee, the left-of-centre firebrand who is head of the All India Trinamool Congress party based in the big eastern state of West Bengal. She had famously pulled her party out of a Congress-led coalition government in 2012, in protest at a decision to raise diesel prices and open India’s supermarket sector to investment from foreign chains such as Walmart. Though the government survived back then thanks to support from the BSP and SP, the uncertainty roiled financial markets. But Congress said it was wrong to assume a coalition government would be fractious and bad for the economy. The trend of multi-party governments began in the late 1980s and strengthened onwards as the BJP rose to prominence, weakening the dominance Congress enjoyed for years. “The mahagathbandhan (grand-coalition) is a work in progress, it is going to be a reality,” Congress spokesman Sanjay Jha said. Referring to the administration led by Congress until 2014 he added: “In 10 years of a coalition government we had better GDP growth, we had a very stable society. The myth that majority governments provide better governance has been totally disproved.” The government contends that recent downward revisions to official data shows that GDP growth in those 10 years between 2004-2014 averaged 6.7 percent, below an average of 7.4 percent under the current government.