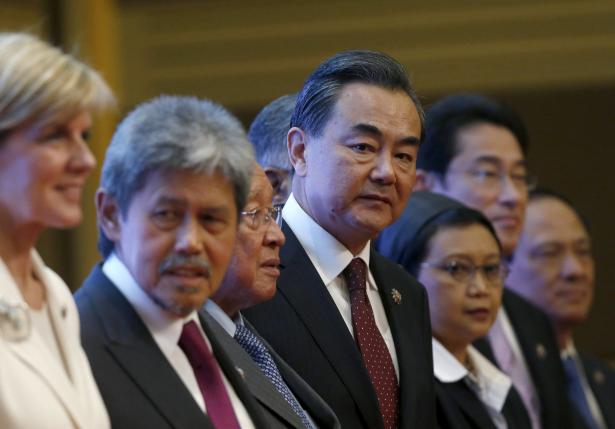 KUALA LUMPUR - Southeast Asian nations have yet to agree a concluding statement at a regional meeting in Malaysia because of wrangling over how to refer to the disputed South China Sea, Singapore's foreign minister said on Thursday. The delay is a sign of the divisions within the Association of South East Asian Nations (ASEAN) in dealing with China's assertiveness in the South China Sea, in particular Beijing's recent construction of artificial islands in the waterway. "The joint communique should have been done by yesterday. It has not been finalised as of now," Singapore Foreign Minister K. Shanmugam told a news conference in Kuala Lumpur. "The paragraph relating to the South China Sea is causing some problems," he said, adding there was "no consensus on how the paragraph ought to be". He declined to give details on the wording. Tensions over the South China Sea have dominated talks this week in the Malaysian capital, where ASEAN foreign ministers have also met their counterparts from various countries including China and the United States. China claims most of the waterway, through which $5 trillion in ship-borne trade passes every year. The Philippines, Vietnam, Malaysia, Taiwan and Brunei also have overlapping claims. ASEAN foreign ministers concluded their talks on Tuesday after rebuffing a request from China to leave the dispute off the agenda. Some foreign ministers, including from host Malaysia, said it was too important to ignore. An earlier draft communique said ASEAN was concerned about developments in the South China Sea and emphasised there should be no use of threats or force. It also expressed concern over the pace of negotiations in trying to agree a code of conduct that is intended to bind China and ASEAN to detailed rules of behaviour at sea. A statement was expected by the end of the day, senior officials said. Chinese Foreign Minister Wang Yi said on Wednesday that Beijing had halted land reclamation in the South China Sea and that ASEAN and China shared a desire to resolve the thorny issue through dialogue. In June, China said it would soon complete some of its reclamation in the Spratly archipelago of the South China Sea, while adding it would continue to build facilities on the man-made islands. Indonesia and Myanmar said the priority was to finalise the code of conduct. Arrmanatha Nasir, a spokesman for Indonesia's Foreign Ministry, said he could not say how long that would take. "As long as there's engagement, that's a good sign," he said. Thailand's foreign minister, General Tanasak Patimapragorn, on Wednesday said talks on the code of conduct had moved to "the next level". He did not elaborate. -Reuters