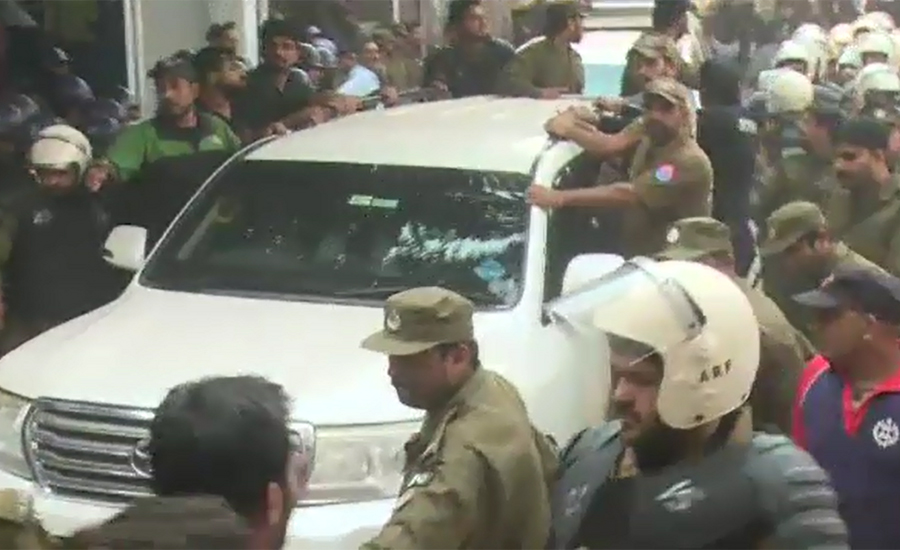 LAHORE (92 News) – Accountability Court Judge Najamul Hassan on Monday extended the remand of Opposition Leader in the National Assembly Shehbaz Sharif until November 7. The NAB had demanded his 15-day remand. The court also approved his three-day transit remand for his participation in the National Assembly session. The NAB prosecutor told court Shehbaz Sharif remained the chief minister thrice, but he is not cooperating in the investigations. “He puts a question when he is asked to give reply to a question,” he said. Shehbaz Sharif also held long discussion with Hamza Shehbaz in courtroom. Earlier, former chief minister Shehbaz Sharif was shifted, who is under arrest in the Ashiana Housing scam, to the accountability court. A large number of PML-N leaders with workers reached the court. They staged a sit-in when they were not allowed to enter the court. They had a scuffle with the police and threw flower pots and water bottles towards the police. Meanwhile, PML-N spokesperson Maryium Aurangzeb exchanged hot words with the police. After the hearing, Shehbaz Sharif will be shifted to Islamabad for the National Assembly session today. In his statement in court, Shehbaz Sharif said that the NAB had arrested him in the Ashiana scam and investigated him about Saaf Pani and his assets. “Today I am in court due to false allegations and may Allah clear me in them,” he said. The former chief minister said that he was a cancer patient and underwent a surgery abroad. “My blood and sugar tests were not conducted despite repeated requests,” he said. After the hearing, the NAB officials took Shehbaz Sharif to Islamabad.