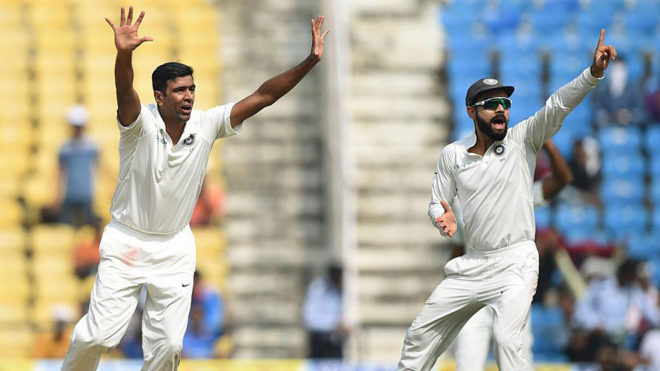 NAGPUR (Reuters) - Ravichandran Ashwin spearheaded a dominant bowling display by India, taking four wickets as they dismissed Sri Lanka for 205 after the visitors had won the toss and opted to bat on the first day of the second Test in Nagpur on Friday.

The off-spinner took 4-67 while paceman Ishant Sharma and left-arm spinner Ravindra Jadeja shared the remaining six wickets as the touring side were bundled out in the final session on a greenish wicket.

Sri Lanka, who succumbed by a 9-0 margin across all formats at home against India earlier this year, were finally given something to cheer about when Lahiru Gamage dismissed opener Lokesh Rahul for seven as the hosts went to stumps on 11-1.

Murali Vijay, who returned at the top of the batting order after opener Shikhar Dhawan opted out of the match for personal reasons, and Cheteshwar Pujara were both unbeaten on two at the close of play.

Half-centuries from Sri Lanka captain Dinesh Chandimal, who top-scored with 57, and opener Dimuth Karunaratne (51) gave Sri Lanka’s innings some respectability after they had lost Sadeera Samarawickrama and Lahiru Thirimanne cheaply before lunch.

Pujara took a brilliant low catch at first slip to send back Samarawickrama for 13 off a delivery from Sharma, who replaced the injured Mohammed Shami.

Thirimanne attempted a rash sweep off Ashwin and was bowled for nine.

Pujara was then guilty of dropping Karunaratne on 15 after the batsman had advanced down the pitch to Ashwin and played a lofted on-drive.

The left-hander survived another scare on 21 when replays showed Jadeja had no-balled after wicketkeeper Wriddhiman Saha had stumped him.

Sri Lanka, unchanged from the drawn first Test in Kolkata, were soon reduced to 60-3 after the break when they lost former captain Angelo Mathews leg before to Jadeja for 10.

After Karunaratne and Chandimal added 62 for the fourth wicket to steady the innings, Ishant trapped Karunaratne lbw after the left-hander had scored his 14th half-century in Tests.

Chandimal also completed his 14th fifty before he was out leg before trying to play a reverse sweep against Ashwin. India successfully overturned the umpire’s not out verdict on referral.
Ashwin and Jadeja ran through Sri Lanka’s innings after tea, as India took the last six wickets for 45 runs. Indian batsman Rohit Sharma was included for his first Test in more than a year after replacing seamer Bhuvneshwar Kumar, who withdrew from the final two matches of the series to get married.