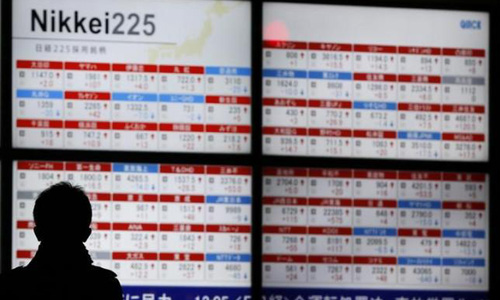 TOKYO - Asian stocks crawled higher on Friday as upbeat US economic data helped revive some risk appetite lost following air strikes on Houthi militants in Yemen, while the dollar rebounded. Crude oil prices were slightly lower on the dollar's bounce after surging overnight on the escalating conflict in Yemen. The euro was flat at $1.0883 EUR=, knocked off an overnight high of $1.1052 after the encouraging US data boosted the dollar. The dollar stood was at 119.17 yen JPY= after pulling back from a five-week trough of 118.33 struck overnight against the yen, a safe-haven currency that attracts bids in times of geopolitical tension. US crude CLc1 was down 1 percent at $50.87 a barrel after rallying 4.5 percent overnight. The Saudi military operation against the Iran-backed Houthi rebels has not affected the oil facilities of major Gulf producers. But fears the conflict could spread and disrupt Middle East shipments have put a floor under the price of oil, which slumped to a six-year low earlier this month. Violence in Yemen firmly capped Asia-Pacific equity gains for now. Japan's Nikkei .N225 was flat after a loss of 1.4 percent the previous day, although South Korean and Australian shares rose slightly. MSCI's broadest index of Asia-Pacific shares outside Japan .MIAPJ0000PUS was up only a modest 0.1 percent after sliding 1 percent the previous day. "The conflict in Yemen saw equities on the back foot in Asia yesterday and should this escalate into a deeper regional conflict, then the risk-off trade is only likely to ramp up," Stan Shamu, market strategist at IG in Melbourne, said in a note to clients. Stock markets slumped worldwide after Saudi Arabia and allies carried out air strikes in Yemen on Thursday. Germany's DAX .GDAXI, which hit a record high early last week, shed 1 percent overnight. Wall Street also closed lower on Thursday but key indexes there trimmed much of their earlier losses thanks to robust US jobless claims and services sector data. While keeping one eye on developments in the Arabian Peninsula, the markets will keep another fixed on a speech by Federal Reserve Chair Janet Yellen later in the session. Yellen is scheduled to speak on "monetary policy" and her comments will be closely analyzed after the Fed's dovish comments last week bruised the dollar. - REUTERS