Asia dragged down by volatile China stocks, dollar edges up 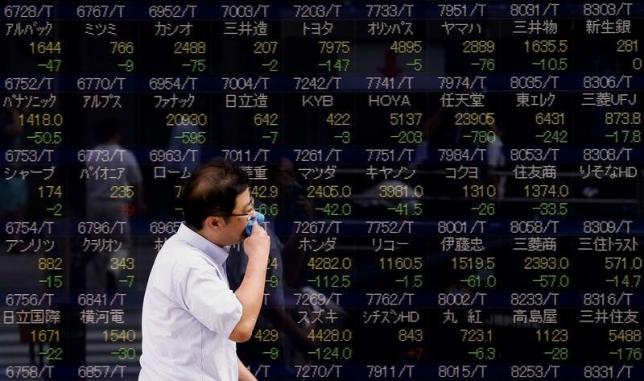 Asia dragged down by volatile China stocks, dollar edges up

TOKYO - Asian stocks were dragged lower by volatile Chinese equities on Monday, as relative stability in the yuan failed to assuage underlying concerns that Beijing may push its currency further down after last week's surprise devaluation. In Europe, however, markets look set to take their cues from Friday's modest gains on Wall Street. Spreadbetters forecast a higher open for Britain's FTSE, Germany's DAX and France's CAC. MSCI's broadest index of Asia-Pacific shares outside Japan fell 0.8 percent. The index added to last week's loss of 2.6 percent suffered after Beijing devalued the yuan, buffeting global financial markets and fanning concerns about China's economy. The yuan fell more than 4 percent at one point, pulling down riskier assets such as emerging currencies globally amid fears the devaluation would spark a global currency war, but financial markets began stabilising towards the end of last week as China slowed the pace of the currency's drop. In a tell-tale sign that some of the relief felt towards the end of last week could be fading amid underlying expectations that the authorities will continue to guide the yuan lower, Shanghai shares lost as much as 1.5 percent after gaining nearly six percent the previous week. They were down 0.1 percent as of 0325 GMT in choppy trading. The CSI 300 index was down 0.3 percent. "Investors were not keen to go into market on anticipation the yuan can depreciate further in the long run," Steven Leung, director at UOB Kay Hian in Hong Kong said. Oil prices down near six-year lows also bit into the markets of the region's export oriented economies. Malaysian stocks suffered a 1.5 percent fall and the ringgit was stuck near a 17-year low. But in a sign that nerves continued to settle in some quarters after the yuan plunge last week, Japan's Nikkei and Australian stocks gained 0.2 percent and 0.3 percent, respectively. The dollar added 0.1 percent to 124.39 yen. The yen was unfazed by Monday's data showing Japan's economy shrank in the second quarter. Though a contraction was expected, concerns that the third quarter may see only mild improvement could rekindle expectations of further monetary easing by the Bank of Japan. The euro slipped 0.1 percent to $1.1097, handing back some of the big gains made last week when the initial shock of yuan's devaluation hit the dollar. The greenback got a lift at the end of last week from encouraging data on U.S. producer prices and industrial output that helped support the case for the Federal Reserve hiking interest rates at its monetary meeting in September. Meanwhile, the People's Bank of China on Monday, set the yuan's midpoint at 6.3969, a touch firmer than the previous session's fix of 6.3975. "Stabilization in yuan fixes could clear the air for renewed dollar appreciation. With reduced volatility, fears on passthrough from the China devaluation to Fed policy should subside and this may see focus shift back to the situation in the United States," wrote Todd Elmer, head of Citi's G10 strategy in Singapore. Suggesting that global financial market interest had moved away from Greece and on to other matters like China's bid to weaken its currency, the euro drew little support even after the European Commission confirmed a deal to lend cash-strapped Athens up to 86 billion euros over three years. The Australian dollar, often used as a liquid proxy of China-related trades, was little changed at $0.7374. The Aussie sank to a six-year low of $0.7217 earlier last week after China's depreciation but recovered ground as Beijing stepped in to arrest the yuan's decline. While China's central bank says there is no reason for further weakening in the yuan, many traders suspect sluggish economic data and expectations of further policy easing will keep the currency under downward pressure. Crude oil, another market churned last week by China's shock move and its potential impact on demand for commodities, continued to struggle in the wake of global oversupply concerns. U.S. crude was down 1.2 percent at $41.99 a barrel, within reach of a six-year trough of $41.35 struck on Friday. -Reuters