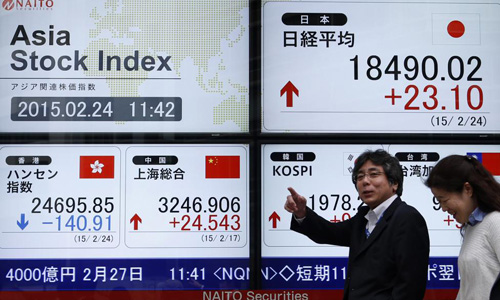 SYDNEY (Reuters) - Asian share markets crept higher on Tuesday as Tokyo scored another 15-year peak, though gains were hostage to what Federal Reserve Chair Janet Yellen might say later in the day about the likely lift-off date for U.S. rate hikes. Moves were mostly modest and MSCI's broadest index of Asia-Pacific shares outside Japan .MIAPJ0000PUS inched up 0.16 percent. The Nikkei .N225 dithered either side of flat before ending up 0.5 percent for a fifth session of increases. European bourses were expected to open a shade softer as time ticks away for Greece to deliver a list of reforms after missing the initial deadline on Monday. Oil prices tried to steady after their latest retreat, with U.S. crude CLc1 up a single cent at $49.46, while Brent LCOc1 added 24 cents to $59.14 a barrel. On Wall Street, the Nasdaq had notched up nine straight sessions of gains in its longest winning streak since September 2010, aided by a further rise in Apple (AAPL.O) stock to an all-time peak. The Nasdaq .IXIC ended Monday up 0.1 percent, while the Dow .DJI fell 0.1 percent and the S&P 500 .SPX lost 0.03 percent. Yellen testifies before Congress later on Tuesday and there is much uncertainty over whether she will echo the dovish tone of the minutes from the Fed's last meeting, or reaffirm June as a window for a first rate hike. "Given the growing evidence that the backdrop can more than withstand what will amount to a modest increase in the policy rate, we find it hard to imagine Yellen will promote the 'lower for longer' mantra that was espoused in the minutes," argued Tom Porcelli, chief U.S. economist at RBCM. "Economic fundamentals quite clearly show we no longer need emergency levels of accommodation." If that view proves right, it would likely send Treasury yields and the dollar higher, while challenging risk appetite globally. Bond investors seemed to be hoping Yellen would choose to take a dovish slant, and yields on 10-year Treasury notes US10YT=RR were holding around 2.07 percent, compared to last week's high of 2.1640 percent. The forex market was leaning the other way and keeping the dollar well underpinned at 119.05 yen JPY= and at 94.582 .DXY against a basket of currencies. The euro remained on the defensive at $1.1336 EUR=, having failed to sustain a bounce to $1.1412 overnight. Doubts lingered over Greece which will now send its economic reform plans to euro zone finance ministers on Tuesday, after missing a Monday deadline. Germany has insisted that any extra spending on the list of reforms had to be offset by savings or higher taxes in order to meet conditions for extending Athens' financial lifeline.