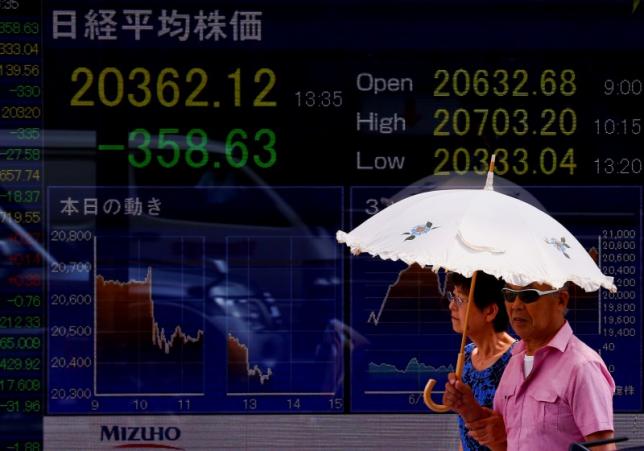 SINGAPORE/TOKYO - Asian shares mostly fell on Friday, and were on track for a steep weekly losses in the wake of China's surprise currency devaluation on Tuesday. Crude oil futures plunged to 6-1/2-year lows after data revealed a big rise in U.S. stockpiles. Financial spreadbetters expected Britain's FTSE 100 to open flat to 1 point lower, Germany's DAX to open 7 to 14 points lower, or down 0.1 percent, and France's CAC 40 to open down 5 to 7 points, or 0.1 percent lower. European shares are expected to have their biggest weekly loss in six weeks. MSCI's broadest index of Asia-Pacific shares outside Japan reversed earlier gains to slip 0.2 percent, which left the index down 2.8 percent for the week. Japan's Nikkei stock index ended down 0.4 percent, and was off about 1 percent for the week. "This week's news from China has done some significant damage to overall sentiment in general, as the gains of the last two weeks have slowly dissolved," Michael Hewson, chief market analyst at CMC Markets in London, wrote in a note. "The market's main preoccupation now is how much lower can the yuan potentially go in the coming weeks, and what effect will it have on price inflation in the coming months?" The People's Bank of China (PBOC) on Friday set its midpoint yuan rate at 6.3975 per dollar prior to the market's open, firmer than the previous day's fix of 6.401. The spot market opened at 6.3990 per dollar and was changing hands at 6.4001 after suspected intervention by the central bank to get the volatile market to settle into a range and to curb expectations that the currency will fall into a depreciation cycle. The PBOC reassured investors on Thursday, saying there was no reason for the yuan to fall further given the country's strong economic fundamentals. The dollar was trading at 124.40 against its Japanese counterpart, up slightly from late U.S. levels and extending its recovery from this week's low of 124.21 yen. For the week, it was up 0.2 percent. The euro was little changed at $1.1151, having gained 1.7 percent this week. This week, the dollar came under pressure as the market instability caused by China's devaluation curbed expectations that the U.S. Federal Reserve's long-awaited interest rate increase would come as early as next month. But strong U.S. retail sales data on Thursday provided evidence in support of views that the Fed is on track to hike. U.S. retail sales rose in July and were revised up for June, while the trend of weekly jobless claims pointed to a tightening job market. "Every new data point continues to solidify the likelihood of a September rate hike," Angus Nicholson, market analyst at IG in Melbourne, wrote in a note. With good U.S. industrial production and producer price numbers tonight, "trading on Monday will largely be driven by the prospect of further strengthening in the U.S. dollar." In commodities trading, crude oil futures remained close to the lowest levels since early 2009, when the financial crisis was wreaking havoc on markets. U.S. crude tumbled more than 3 percent to a 6-1/2-year low as a big rise in U.S. stockpiles intensified worries over a growing global glut. U.S. crude oil was trading down 0.4 percent at $42.05 a barrel at 0600 GMT, while Brent was steady at $49.24, still some way off from their 2015-low of $45.19. -Reuters