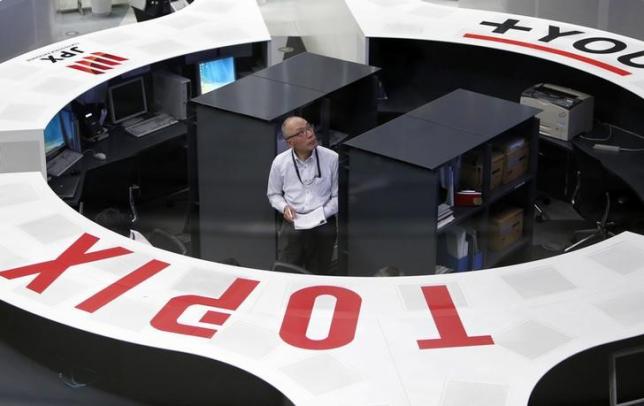 SINGAPORE - Asian equities were mostly firmer on Wednesday with stimulus-fueled Chinese shares taking the lead, while oil sagged after Saudi Arabia ended its military campaign in Yemen, easing tensions in the energy-rich Middle East. Spread betters expected Britain's FTSE .FTSE, Germany's DAX .GDAXI and France's CAC to open mildly higher, taking their cue from gains in Asia. Asian stocks have found support from Chinese measures to spur lending and combat a slowing economy. On Sunday, China's central bank cut the reserve requirement ratio for the country's lenders in the second reduction in two months. The Shanghai Composite Index .SSEC gained 2 percent to a new seven-year peak, spurred by comments from state media which declared the bull market "has just begun." China's stock market has nearly doubled over the past six months on hopes of further monetary easing, with the world-beating performance luring retail investors who have been opening accounts at a record pace. "The last few weeks have seen a flurry of measures on the regulatory, economic, and political front in China. Even though not all news was bullish for equities, we view these developments as favorable for China in the medium-term," Brown Brothers Harriman said in note to clients. Japan's Nikkei .N225 rose 1 percent to a high not seen since April 2000, with foreign investors buying on hopes of a strengthening recovery in the world's third-biggest economy and growth in corporate earnings. Hong Kong shares also rose while South Korean, Australian, Malaysian and Indonesian stocks fell. MSCI's broadest index of Asia-Pacific shares outside Japan .MIAPJ0000PUS climbed 0.3 percent. In currencies, the euro was little changed at $1.0737 EUR= after a choppy session overnight that took it between $1.0660 and $1.0782. The common currency had been buffeted this week by worries cash-strapped Greece may default on its debt. The euro found some respite after euro zone finance ministers moved away from fixing a deadline for Athens to come up with fiscal reforms. Greek Finance Minister Yanis Varoufakis cited signs of convergence on Tuesday between Greece and its lenders to help the euro, although the market remained cautious. "The chance that any meaningful progress will be made is still extremely slim especially since the Germans refuse to release additional bailout funds without a credible reform plan from Greece," Kathy Lien, Managing Director of FX Strategy for BK Asset Management, said in a note. The dollar inched down to 119.525 yen JPY= after gaining 0.4 percent overnight. The Australian dollar rose 0.8 percent to $0.7770 AUD=D4 after three straight days of losses as key measures of inflation were slightly higher than forecast and cooled expectations of the Reserve Bank of Australia cutting interest rates in May. ECONAU In commodities, crude oil extended losses after Saudi Arabia's announcement that it would end its three-week operation against Iran-allied Houthi rebels in Yemen eased tensions in the Middle East. Brent crude was down 0.7 percent at $61.62 a barrel LCOc1 after tumbling more than 2 percent overnight. - Reuters