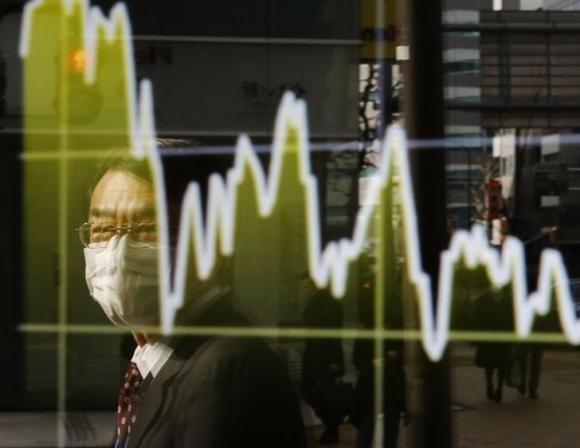 TOKYO (Reuters) - Asian equities rose on Wednesday as pessimism over the Greek debt saga receded somewhat, while the dollar held firm against the yen after spiking up on higher U.S. debt yields. Equities in Europe were also expected to gain. Spreadbetters forecast Britain's FTSE to open steady, Germany's DAX to rise 0.1 percent and France's CAC to gain 0.5 percent. MSCI's broadest index of Asia-Pacific shares outside Japan rose 0.3 percent. The region's outstanding performers included Indonesian stocks marching to a record high a day after the country's central bank backflipped to cut rates three months after hiking them. Japan's Nikkei rose 0.9 percent, given an extra lift by a weaker yen. There was little reaction to the Bank of Japan's well-anticipated decision to stand pat on monetary policy and maintain its massive stimulus. Australian shares rallied and the Aussie dollar rose, buoyed by the proposed $5.1 billion takeover of Toll Holdings, the country's biggest freight firm, by Japan Post Holdings. The Australian dollar fetched $0.7826 and was in sight of this month's peak of $0.7877. The Toll news "was a supporting factor," said Sean Callow, a senior currency strategist at Westpac. "We had soaring U.S. bond yields and a sharp fall in iron ore prices overnight, but the Aussie still went up." U.S. shares gained modestly overnight, with the S&P 500 touching another record high, after hopes that Greece would reach an agreement on emergency loans sharpened risk appetites that were dulled by Monday's collapse in negotiations. Risk appetite, tinged by optimism on Greece, hurt U.S. Treasuries and sent the benchmark 10-year note's yield to a seven-week high, which in turn boosted the dollar versus the yen. The dollar hovered around 119.00 yen after jumping from a low of 118.235 overnight. The euro was steady at $1.1406 after gaining 0.4 percent the previous day on Greek optimism. Greece will remain an immediate concern for the financial markets as the European Central Bank decides later in the day whether to maintain emergency lending to Greek banks that have lost deposits at an unnerving rate. While the ECB is unlikely to lower the ceiling on the emergency lending assistance (ELA) by the Greek central bank, a refusal to increase it would nonetheless be bad news for Greek banks, which are close to using up all the 65 billion euros granted so far. Other focal points with potential impact across markets are U.S. data due later in the session including manufacturing and housing-related indicators, and minutes of January's Federal Reserve monetary policy meeting. "Bottom line is most of the committee will embrace a data dependent approach that leaves a June start to a hiking cycle firmly entrenched," Richard Cochinos, a strategist at CitiFX, wrote in a note to clients. "In addition, the minutes should help illuminate exactly what 'international considerations' means," Cochinos said, pointing to the Fed's recent reference to global developments with a potential impact on the U.S. economy. U.S. crude oil was down 25 cents at $53.28 a barrel as the market took a breather after rallying earlier in the week amid threats to Middle East production and a falling U.S. rig count.