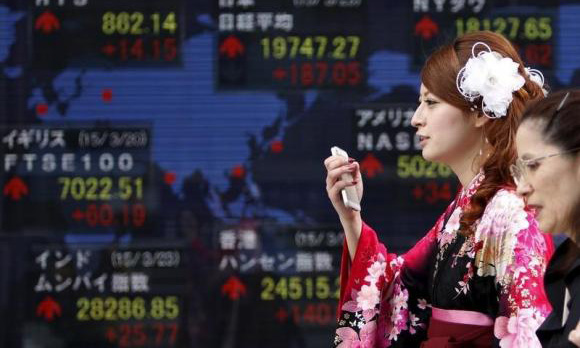 SYDNEY - Asian share markets were mostly lower on Thursday as tensions in the Middle East and losses on Wall Street soured sentiment, while the dollar's bull run looked to have stalled for the time being. Risk appetite took a knock from news Saudi Arabia and its Gulf Arab allies had launched air strikes in Yemen against Houthi fighters who have tightened their grip on the southern city of Aden. The potential threat to oil supplies from the Gulf was enough to lift U.S. crude CLc1 $1.24 to $50.45, while Brent crude LCOc1 added $1.47 to $57.95 a barrel. A dearth of economic data in Asia meant the path of least resistance was lower and MSCI's broadest index of Asia-Pacific shares outside Japan .MIAPJ0000PUS fell 0.8 percent. Australia's main index .AXJO shed 1.5 percent, while the Nikkei .N225 lost 1.6 percent in its biggest daily decline since mid-January. Dealers said the synchronized selling in recently popular trades including biotech stocks, Treasuries and the dollar, smacked more of profit-taking for the quarter-end than a major shift in market trends. On Wall Street, a drop in technology stocks knocked the Nasdaq IXIC. down 2.37 percent for its biggest decline in nearly a year. The Dow .DJI fell 1.62 percent, while the S&P 500 .SPX lost 1.46 percent. Bucking the trend, Kraft Foods (KRFT.O) surged 36 percent after a merger agreement with food manufacturer H.J. Heinz Co, owned by 3G Capital and Berkshire Hathaway (BRKb.N). Not helping equities was data showing spending on U.S. durable goods fell for a sixth straight month in February, fresh evidence that economic growth slowed sharply early in the year, due in part to bad weather. That was just the latest in a run of soft U.S. indicators, a contrast to Europe where the news has been getting better. JPMorgan noted that the gap between downward surprises on U.S. data and upward surprises on EU figures was at its widest since February last year when bad weather was also having a chilling effect on U.S. growth. Yet Treasuries failed to get any lift from the data as poor demand in a five-year debt auction pushed prices lower ahead of a sale of seven-year paper later on Thursday. Yields on 10-year notes US10YT=RR were up at 1.936 percent, from 1.85 percent early on Wednesday. In currency markets, the dollar continued to consolidate after wild swings last week. Measured against a basket of currencies, the dollar eased 0.2 percent to 96.819 .DXY, just above a three-week trough of 96.387 set on Tuesday. Earlier this month, it scaled a 12-year peak of 100.390. The euro EUR= was last at $1.0975, well off a 12-year trough of $1.0457 plumbed two weeks ago. Against the yen, the dollar softened to 119.29 JPY=, again just above a one-month trough of 119.22 set on Tuesday. "While very tentative, the recent stability in the euro might suggest at least a near-term equilibrium has been reached," said CitiFX G10 strategist Josh O'Byrne. "Though we still see EUR risks lower, we could be entering a period of consolidation." The break in the dollar's ascent has been a relief to some commodities with gold holding up at $1,197.70 XAU= and near a three-week high. - REUTERS