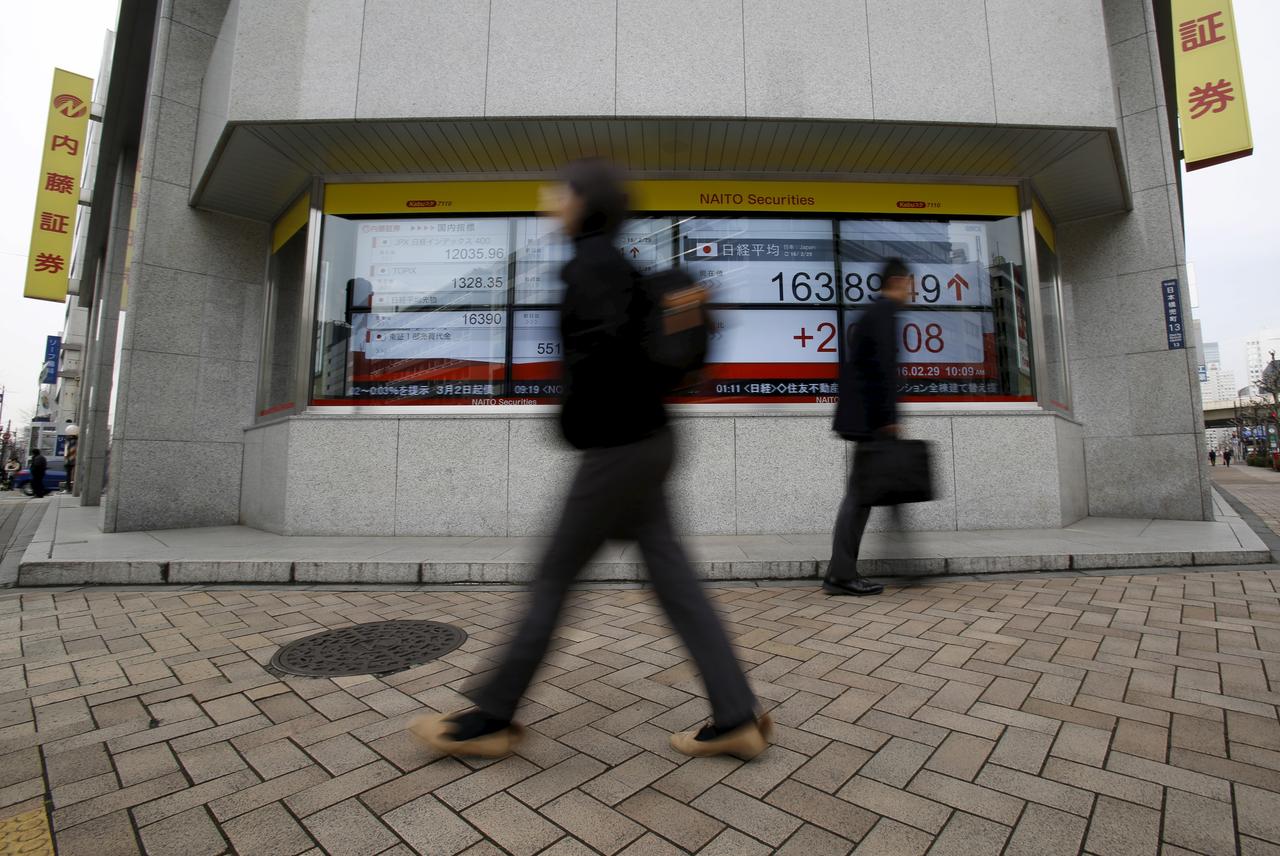 SYDNEY (Reuters) - Asian shares stumbled on Tuesday and the dollar hovered near two-week lows as prospects for a long-awaited Sino-US trade deal were dealt another blow after the United States levelled sweeping criminal charges against China’s telecom giant Huawei. The mood was expected to be subdued elsewhere with spreadbetters suggesting a tentative start for Europe while futures for the S&P 500, Dow and Nasdaq were each off 0.2 percent. In Asia, the losses were led by Australia and New Zealand, with their benchmark indices down 0.5 percent and 1.2 percent respectively. Chinese shares opened in the red, then recovered in the afternoon. Shanghai’s SSE Composite was up 0.1 percent while the blue-chip index climbed 0.4 percent. Overall, MSCI’s broadest index of Asia-Pacific shares outside Japan was still down 0.2 percent even after recouping some of its earlier losses. Japan’s Nikkei, down about 1 percent almost all day, turned around to end 0.1 percent higher. Despite the late uptick in share prices, the mood was still gloomy after the US Justice Department unsealed indictments against China’s top telecom equipment maker, Huawei Technologies Co Ltd, accusing it of bank and wire fraud to evade Iran sanctions and conspiring to steal trade secrets from T-Mobile US Inc. The jolt threatens to undermine prospects for a trade deal between the economic giants as markets nervously await a round of trade talks with Chinese Vice Premier Liu He set to meet U.S. officials on Wednesday and Thursday. Further complicating matters, China triggered the legal process on Monday for the World Trade Organization to hear Beijing’s challenge to U.S. tariffs, and berated the United States for blocking the appointment of judges who could rule on it. Souring US-China relations roiled global markets for much of last year, and have kept investors on the back foot this month. The trade war’s broadening impact on world growth is one reason the U.S. Federal Reserve has signalled it will be patient on policy after raising rates four times in 2018. Indeed, many economists, including the International Monetary Fund, have cut their forecasts for global growth this year, citing the U.S.-China trade war. “Slowdown is feeding into some acute areas of economic unease,” U.S. bank Citi said in a note, citing recent disappointing factory output data out of Europe and China. It noted that investors were pricing in a 1 percent contraction in global earnings per share (EPS) this year. “This would be the worst year-on-year percentage change in EPS since 2015” even though economic growth is likely to be much higher this year than seen in 2015, the note said.

Markets will have more catalysts this week with over 100 of the S&P500 companies reporting results, including Amazon, Apple and Facebook. Overnight on Wall Street, the Dow and S&P 500 each closed down 0.8 percent and the Nasdaq was off more than 1 percent. The losses came as shares of Caterpillar and Nvidia Corp nosedived after the two manufacturers joined a growing list of companies cautioning about the crippling effects of softening Chinese demand. “Both companies are seen as industry bellwethers and their disappointing results provide further evidence that this time China’s slowdown is for real,” said Rodrigo Catril, Sydney-based strategist at National Australia Bank. Worryingly, earnings at China’s industrial firms too shrank in December, pointing to more troubles for the country’s vast manufacturing sector already struggling with a decline in orders, job layoffs and factory closures. Slowdown fears slugged the US dollar, which faltered to its lowest in two weeks on Monday. The dollar index, which measures the greenback against a basket of major currencies, was last at 95.733. Against the safe haven Japanese yen, the dollar was down at 109.32, on track for a third straight session of losses. The downbeat global growth impulse mean investors will look for further confirmation the Fed will pause its rate-hike cycle at a two-day policy meeting ending Wednesday. Elsewhere, sterling dithered against the dollar ahead of voting in Britain’s parliament on Tuesday that aims to break the Brexit deadlock. It was last at $1.3152. Oil bounced after hefty overnight losses. US crude was last up 35 cents at $52.34 a barrel while Brent gained 37 cents to $60.30. US gold futures hovered near seven-month highs at $1,302.2 per ounce. Spot gold was last at 1,304.19 after breaking above a key psychological barrier of $1,300 an ounce on Friday.