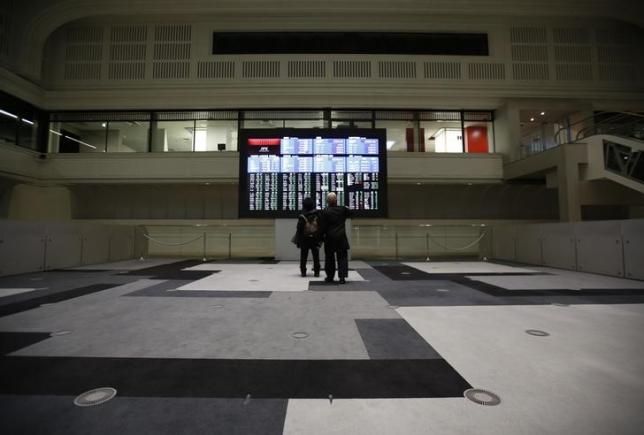 TOKYO - Asian shares slipped on Monday while the dollar marked fresh highs after Federal Reserve Chair Janet Yellen suggested that an interest rate hike could be around the corner. The Fed should raise interest rates "in the coming months" if economic growth picks up and the labor market continues to improve, Yellen said on Friday. MSCI's broadest index of Asia-Pacific shares outside Japan .MIAPJ0000PUS fell 0.2 percent. But Japan's Nikkei stock index .N225 added 0.9 percent, as the yen weakened and expectations rose that the government would delay a sales tax hike scheduled for April next year. "The market is scared of 'negative surprises," said Michiro Naito, executive director at equity derivatives and quantitative strategies at JPMorgan, noting investors would still hesitate to take large positions with event risks such as the Fed's decision looming. Japanese Prime Minister Shinzo Abe said he would delay the increase by 2-1/2 years, Masahiko Komura, vice president of the ruling Liberal Democratic Party, told reporters on Monday, echoing what a government source told Reuters on Sunday. On Friday, Wall Street posted daily and weekly gains ahead of a three-day weekend in the United States, due to Monday's Memorial Day holiday. While higher US interest rates could sap global liquidity, Yellen's comments were taken in stride by Wall Street as they suggested the US economy was strong enough to weather another rate increase, following from the December hike. Her comments also were largely in tune with a chorus of other Fed officials who have indicated in recent weeks that policymakers could resume raising rates as soon as next month. St. Louis Fed President James Bullard was the latest voice, saying on Monday global markets appear to be "well-prepared" for a summer interest rate hike, although he did not specify a date for the policy move. The probability of a rate increase at the Federal Open Market Committee's June 14-15 meeting rose to 34 percent from 30 percent before Yellen's remarks, according to CME Group. Market bets on a rate increase at the July 26-27 policy meeting edged up to 60 percent, more than double the estimate from a month ago. The dollar index logged a fresh two-month high of 95.940, and was last up 0.4 percent at 95.897 .DXY. The dollar rose 0.5 percent to 110.96 yen JPY= after earlier notching a fresh one-month higher of 111.03 yen. The dollar also got a lift from revised US gross domestic product data for the first quarter released on Friday, that showed that growth did not slow as much as first estimated. Because of Yellen's emphasis on the labor market, the US nonfarm payrolls report on Friday will attract more than the usual attention. Economists expect US employers to have added 170,000 jobs in May, slightly more than they did in April, and hourly wages to show a 0.2 percent increase from the previous month. The euro wallowed around 2-1/2 month lows, edging down 0.1 percent to $1.1104 EUR=. The European Central Bank will meet on Thursday, and is expected to keep interest rates on hold and reaffirm its focus on implementing its stimulus package announced in March. Crude oil futures remained just shy of the key $50 per barrel level after marking weekly gains, feeling some pressure from the stronger US dollar that made it more expensive for holders of other currencies. Brent crude LCOc1 edged down 0.1 percent to $49.25 a barrel, after gaining 1 percent last week. US crude CLc1 was 0.1 percent higher at $49.36 after rising about 3 percent for the week. The dollar's strength took a toll on spot gold XAU=, which dropped 0.8 percent to $1,202 an ounce. It plumbed a low of $1,199.60 earlier in the session, its lowest since late February. -Reuters