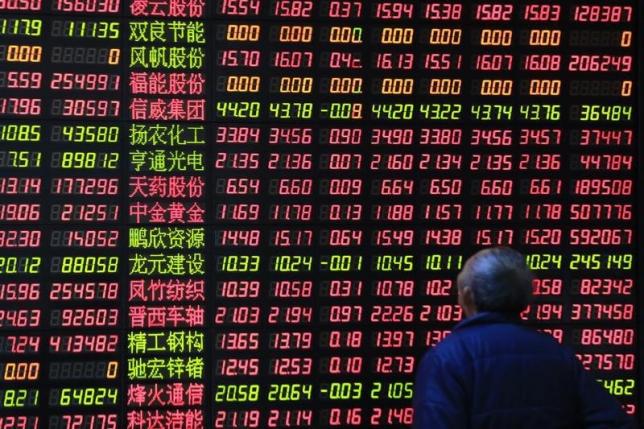 Activity was guarded most elsewhere in a week book-ended with holidays and a U.S. jobs report that could affect the timing of interest rate hikes there.

After some early dithering, Japan's Nikkei .N225 firmed 0.8 percent, helped by talk of demand for the new quarter and financial year.

Federal Reserve Chair Janet Yellen on Friday reaffirmed that U.S. rates would likely start rising later this year but emphasised the pace of tightening would be gradual and data-dependent.

The conditional outlook helped nudge longer-dated Treasury yields lower and left the dollar listless for the moment. It fetched 119.21 yen JPY= on Monday, a whisker higher than at the end of last week and short of the near eight-year peak of 122.04 set early this month.

Oil prices fell further as Iran and six world powers tried to reach a nuclear deal that could add more supply to the market if sanctions against Tehran are lifted. US crude CLc1 eased 77 cents to $48.10 a barrel and Brent LCOc1 lost 42 cents to $55.99.

The data diary in Asia was rather sparse, with Japan reporting a disappointing decline in industrial output for February. Figures on German inflation, European confidence and US personal income and spending are due later in the session.

Flash inflation data for the euro zone are out Tuesday and manufacturing surveys on China the day after. That should be just an appetiser for Friday's US payrolls report.

The market reaction will be complicated by holidays across much of the western world on Friday.

Only some US markets will be open and then only for shortened hours.

Investors will again have to keep a wary eye on Greece and its talks with international creditors where the parties are struggling to come up with a list of acceptable reforms. Greece will run out of money by April 20 if it does not secure funding from its European partners, a source familiar with the matter told Reuters last week. –Reuters