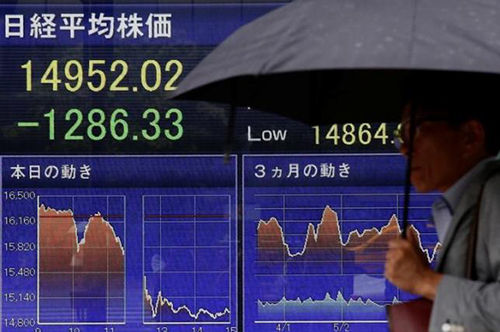 TOKYO – Profit taking weighed on Asian stocks on Wednesday after a record run on Wall Street showed signs of petering out, while the dollar hovered near a four-month high against a basket of currencies following upbeat U.S. data. Investors' risk appetite, which has recovered rapidly from the Brexit shock late in June, received a sobering reminder after the International Monetary Fund cut its global growth forecasts for the next two years on Tuesday, citing uncertainty over Britain's looming exit from the European Union. Spreadbetters also saw a subdued start for European stocks, forecasting a slightly higher open for Britain's FTSE .FTSE, a marginally lower start for Germany's DAX .GDAXI and France's CAC .FCHI to open flat. MSCI's broadest index of Asia-Pacific shares outside Japan .MIAPJ0000PUS edged up 0.2 percent, having reached its highest in almost nine months last week. Shares rose in Hong Kong, Australia, India and much of Southeast Asia, but retreated in South Korea and China. Japan's Nikkei .N225 fell 0.3 percent, on track for its first decline in seven days. "Although the market is taking a break from a long rally amid a lack of fresh catalysts to buy, investors may chase the market higher depending on central bank events next week," said Takuya Takahashi, a strategist at Daiwa Securities in Tokyo. The S&P 500 .SPX pulled back from record highs on Tuesday, while the Dow .DJI edged up for an eighth straight day of gains, as investors pondered mixed earnings reports and a gloomier global outlook. [.N] The dollar index stood at 97.054 .DXY, after touching a four-month peak of 97.158. Tuesday's stronger-than-expected June U.S. housing starts data has given the dollar a lift. "The U.S. dollar is proving to be a big winner in a period when central banks around the world are talking about easing," wrote Kathy Lien, managing director of FX strategy for BK Asset Management. "That leaves the Federal Reserve and the Bank of Canada as the lone soldiers standing ground on steady policy. We haven't seen significant strength in the Canadian dollar, partly because oil prices have been falling but the U.S. dollar is seeing nice momentum." The dollar traded at 106.055 yen JPY= after touching a one-month high of 106.53 overnight. Expectations that the Bank of Japan would ease monetary policy later this month have weighed on the yen. The euro was steady at $1.1016 EUR= after slipping to a three-week trough of $1.1000. The Australian dollar was nearly flat at $0.7503 AUD=D4 after falling 1.1 percent on Tuesday, when it was dragged down by a New Zealand dollar weakened by growing speculation that the country's central bank it will cut rates in August. Fed funds futures rates show investors see almost a 50/50 chance that the U.S. central bank will raise interest rates by its December meeting, according to CME Group's FedWatch tool, compared with less than 20 percent a few weeks ago. Geopolitical risks also loomed as a factor for markets. The Turkish lira TRYTOM=D3 came under renewed pressure and fell to its lowest level since last September amid reports of a widening purge in Turkey after an abortive coup last week. According to a BofA Merrill Lynch fund managers' survey, investors saw geopolitical risk as the biggest risk to financial market stability, followed by risks of protectionism. Crude oil prices bounced modestly after falling more than 1 percent on Tuesday, when a rallying dollar and a global fuel glut offset forecasts for lower U.S. crude stockpiles. Brent LCOc1 was up 0.3 percent at $46.81 a barrel. [O/R] Profit taking nudged nickel CMNI3 away from a 10-month high reached overnight amid persistent concerns over a Philippines mining crackdown. Zinc CMZN3 edged up to a 14-month peak on worries over falling mine output. –Reuters