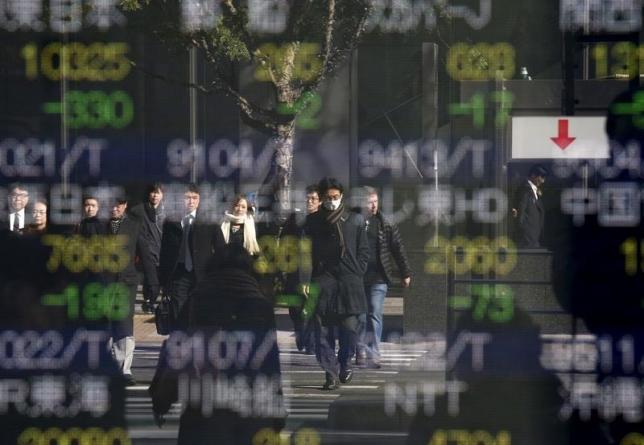 HONG KONG - Asian stocks held near three-week lows on Wednesday as concerns about the underlying strength of the Chinese economy dogged investors. Oil prices jumped by nearly two percent on growing hopes a global output freeze may be agreed soon. MSCI's broadest index of Asia-Pacific shares outside Japan .MIAPJ0000PUS was barely in positive territory after falling to its lowest level since March. 16. Overnight, it dropped 1.6 percent, its biggest fall in almost two months. While global risky assets have staged a smart recovery from February's lows, led by Chinese stock markets on hopes that Beijing can successfully avert a sharp slowdown, policymakers and investors are worried the recovery may be at best, bumpy, or at worst, short-lived. The cautious undertone rippled over into Europe with benchmark indexes opening broadly mixed. Britain's FTSE 100 .FTSE rose 0.5 percent, Germany's DAX .GDAXI was flat and France's CAC 40 .FCHI was up 0.1 percent. Alex Wolf, emerging markets economist at Standard Life Investments, said it is still too early to call an economic stabilization in China because property inventories are still very high and much of the recent economic activity was driven by quasi-fiscal spending. "A rebound based on property exuberance and quasi-fiscal stimulus means it might be more transient than the market wants to believe," he said in a note. Data last week showed foreigners are estimated to have pumped $36.8 billion into emerging market stocks and bonds in March, the highest monthly inflow in nearly two years, the Institute of International Finance said. But that support seems to have likely come to an end with Asian stocks falling by 3.6 percent since the start of the month. Japanese stocks led regional losers with indexes in their longest losing streak since the start of Abenomics. Recent weak economic data have raised fears the economy may have slipped into its fourth recession in five years, with a resurgent yen adding to pressure on exporters. "The market is now posing big questions about Abenomics," said Stefan Worrall, director of Japan equity sales at Credit Suisse. Even in the United States, a rare bright spot for the global economy, recent weak data prompted economists to cut their first-quarter gross domestic product growth estimates by as much as half a percentage point to as low as a 0.4 percent annualised rate, which would be its slowest growth in two years. Risk aversion was on the rise in currency and fixed income markets as well. Investors bought back the yen, a low-yield currenc2y that investors often sell to seek higher yields elsewhere when risk appetite is strong. The yen JPY= hit a 17-month high of 109.92 to the dollar on Tuesday after Japanese Prime Minister Shinzo Abe said countries should avoid seeking to weaken their currencies with "arbitrary intervention." It last traded at 110.41. His comments dimmed any prospects of currency intervention by the Japanese authorities to stem the yen's rise in the near future, analysts said. The euro EUR= was little changed at $1.1357, hovering not far from its 5 1/2-month high of $1.1438. German 10-year yield DE10YT=TWEB fell below 0.10 percent for the first time since April last year, edging near its record low of around 0.05 percent touched almost a year ago. The 10-year US Treasuries yield US10YT=RR dropped to a five-week low of 1.715 percent, having fallen almost 0.3 percentage point from its March 16 peak of 2.002 percent. The two-year yield US2YT=RR fell to a near six-week low of 0.716 percent while traders reduced bets on a Fed rate hike in June further. Oil offered the sole bright spot in financial markets with prices extending their rebound after Kuwait insisted major producers will agree to freeze output later this month even as key player Iran continued to balk at the plan. The market was also helped by data on US crude supply-demand for last week from industry group American Petroleum Institute (API) showing a surprise fall of 4.3 million barrels in inventories in the week to April 1, versus an expected weekly increase of 3.2 million barrels. Brent crude futures LCOc1 rose 1.6 percent to $38.48 per barrel, off one-month low of $37.27 hit on Tuesday. US crude futures CLc1 jumped 2.5 percent to $36.75 a barrel. -Reuters