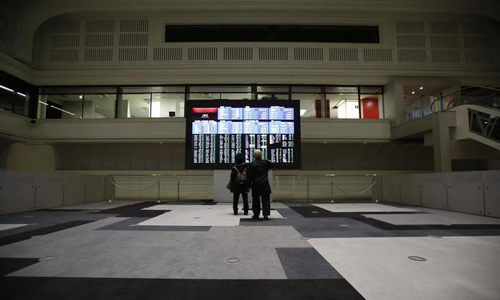 HONG KONG- Asian stocks bounced and the dollar strengthened on Monday after the FBI said it stood by its earlier recommendation that no criminal charges were warranted against Democrat Hillary Clinton.
The news lifted a cloud over Clinton's presidential campaign two days before the U.S. election, and boosted S&P 500 Index futures by 1.2 percent, a gain that is likely to snap a nine-day losing streak in the U.S. stock index - its longest in more than 35 years. But volumes were thin, indicating many investors had already taken to the sidelines ahead of the vote. MSCI's broadest index of Asia-Pacific shares outside Japan advanced 0.7 percent. Leading regional gainers were Australian stocks and Japanese shares with gains of 1.3 percent and 1.2 percent, respectively. “This will surely boost the chance of Clinton’s victory. Barring another unexpected scandal on her side, it looks likely that she will win the race," said Norihiro Fujito, senior investment strategist at Mitsubishi UFJ Morgan Stanley Securities in Tokyo. “Given that the market had been slipping for nine days, there will be short-covering.” The biggest winner was the Mexican peso, which has acted as something of a bellwether of sentiment as Republican Donald Trump's proposed policies are considered to be deeply negative for the country. It rose to a 1-1/2 week high earlier. Investors had been unnerved by signs of a tightening presidential race between Clinton and Trump, whose stance on foreign policy, trade and immigration has rippled through financial markets. Clinton is seen as a candidate of the status quo and her policies are viewed as more predictable than her Republican rival, a political novice. The FBI said on Sunday it stood by its earlier finding that no criminal charges were warranted against Clinton for using a private email server for government work, lifting a cloud over her presidential campaign two days before the U.S. election. However, despite giving a boost to Clinton's prospects, investors are unlikely to make big bets given Trump's gains in polls recently may not be entirely due to the FBI probe. Initial results of the Tuesday vote are expected to begin rolling out by Wednesday morning Asia time. Indeed, despite the early bounce in risky assets, the market undertone was noticeably cautious before the outcome with a key gauge for market volatility, the popular VIX index at its highest levels in nearly six months. Markets are also expecting a U.S. Federal Reserve rate increase next month after a government report on Friday showed solid jobs gains and a rise in wages in October. Elsewhere, Hong Kong property stocks tumbled after authorities unveiled a fresh round of policy tightening measures late on Friday to curb rising prices. A sub-index of property-related shares was down more than 4 percent. In the currency market, the standout performer was the Mexican peso, rallying 1.7 percent to 18.69 to the dollar, hitting its highest level since Oct 26. Another notable outperformer in early Asian trades was the Australian dollar which jumped more than 1 percent against the Japanese yen to 79.98. The dollar rose as much as 1 percent against the yen and last stood at 104.15 yen, while the euro dropped 0.5 percent to $1.10840. "The dollar is being bought back on lessened prospects of a Trump presidency. But so far it is not active buying, as Clinton is likely to maintain a policy that prevents a strong dollar if she is elected, and as economic prospects remain unclear," said Masafumi Yamamoto, chief forex strategist at Mizuho Securities in Tokyo. Bond prices retreated with both U.S. and Japanese bond futures falling as risk appetite surged across the board. U.S. 10-year Treasury futures were last down about 0.3 percent Sunday evening in electronic trading. Gold and silver prices, safe-haven assets which are inversely correlated to risk, fell 1 percent each. Oil prices rose , with traders citing opportunistic buying following sharp declines in the previous week on the back of ongoing weak fundamentals. Brent crude oil futures were trading at $45.92 per barrel at 0119 GMT, up 34 cents, or 0.75 percent. U.S. West Texas Intermediate (WTI) crude futures were down 0.40 cents, or 0.91 percent, at $44.47 a barrel. -Reuters