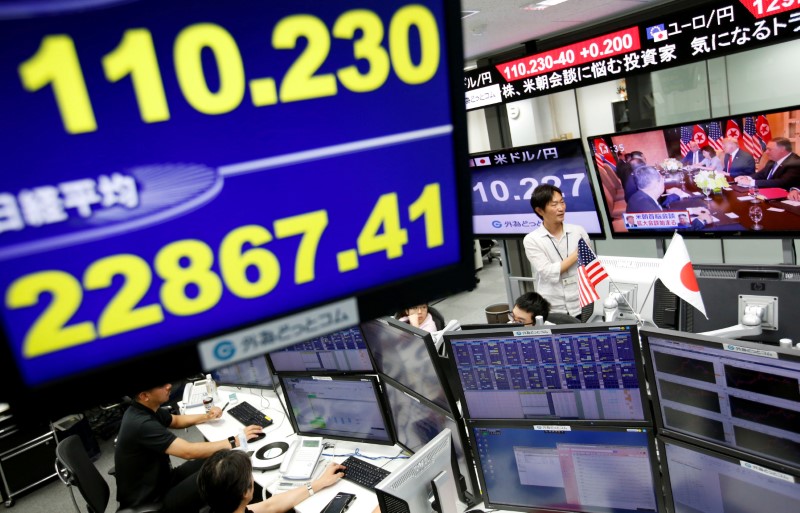 TOKYO (Reuters) - Asian stocks inched on Friday following a tech-led rise on Wall Street, although the latest exchange of trade threats between Beijing and Washington capped gains and drove safehaven flows to the dollar, which hovered near a two-week high. Investors also remain cautious ahead of the July US jobs report due later on Friday, which will give a reading on the health of the world’s largest economy and possible clues about the pace of Federal Reserve interest rate rises. MSCI’s broadest index of Asia-Pacific shares outside Japan was up 0.05 percent. The index was down more than 0.6 percent for the week on US-China trade tensions. The trade war between the world’s top two economies intensified midweek after US President Donald Trump raised pressure on China by proposing a higher 25 percent tariff on $200 billion worth of Chinese imports. “The equity markets now have time to regroup and settle down after yesterday’s slide. But the US-China trade conflict involves the epicenter of the region and this will continue to weigh psychologically on Asian equities,” said Masahiro Ichikawa, senior strategist at Sumitomo Mitsui Asset Management in Tokyo. The Shanghai Composite Index swerved in and out of the red in early trade, and was last up 0.1 percent, after dropping 2 percent the previous day. Japan’s Nikkei added 0.25 percent and South Korea’s KOSPI was 0.45 percent higher. Tech-heavy Taiwan stocks outperformed thanks to the gains on Wall Street, rising 0.7 percent. Technology stocks pushed the S&P 500 and Nasdaq higher , driven by Apple shares as the iPhone maker became the first publicly traded US company worth a trillion dollars. In foreign exchange, the dollar index against a basket of six major currencies extended its overnight gains and rose to a two-week high of 95.209. Trade tensions were seen driving demand for the US currency, with a slide by the pound providing an extra lift. Sterling dropped more than 0.8 percent despite the Bank of England lifting interest rates, after Governor Mark Carney said monetary policy needed to “walk not run” and expressed concern about the risks of a cliff-edge Brexit. The euro was slightly lower at $1.1584 following a loss of 0.6 percent the previous day. Bubbling concerns over Italy weighed on the euro, with the country’s bond yields rising to two-month highs following media reports of a government meeting on the budget revived market concerns about tensions within the ruling coalition. The dollar added 0.1 percent to 111.73 yen, having gained about 0.6 percent this week. The dollar received a big boost against the yen earlier this week after the Bank of Japan tweaked its monetary policy but retained its commitment to keeping interest rates low. Financial markets are now looking to the July jobs US report due later in the session for immediate cues. According to a Reuters survey of economists, nonfarm payrolls likely rose by 190,000 jobs in July after increasing by 213,000 in June. “A decent jobs report should prompt a straight-forward reaction by the markets, with US yields rising and the dollar gaining,” said Ichikawa at Sumitomo Mitsui Asset Management. With trade tensions generating investor demand for safe haven assets, the 10-year US Treasury note yield pulled back slightly to 2.995 percent from a 10-week high above 3 percent brushed midweek. The 10-year Treasury yield was pushed to the 10-week peak partly due to a surge in Japanese government bond yields, which rose to 1-1/2-year highs this week as the market tested the BOJ’s rejigged policy framework under which it now allows yields to fluctuate in a wider band. Crude oil prices eased back slightly after the previous day’s rally, which was driven by an industry report suggesting US crude stockpiles would soon decline again after a surprise rise in the latest week. Brent crude futures were down 0.3 percent at $73.22 a barrel after surging 1.5 percent . Copper on the London Metal Exchange slipped 0.17 percent to $6,128.50 per tonne. With trade tensions hurting demand, the industrial metal was down 2.7 percent for the week.