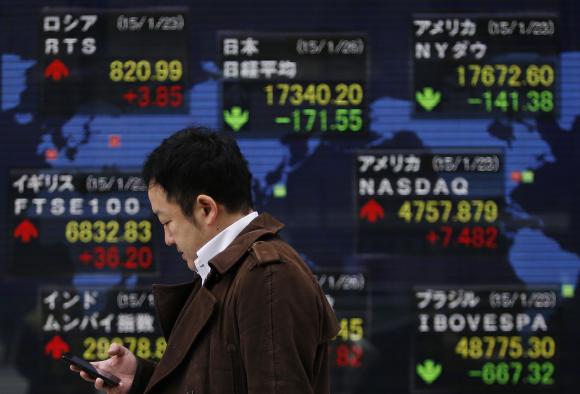 TOKYO (Reuters) - Asian stocks and the euro fell on Thursday as markets erred on the side of caution over the ongoing Greek debt negotiations amid conflicting headlines on progress in the talks. The uncertainty is expected to be highlighted in a mixed open for European bourses with spread betters forecasting Britain's FTSE to fall as much as 0.1 percent, Germany's DAX up 0.3 percent and a flat start for France's CAC. MSCI's broadest index of Asia-Pacific shares outside Japan was down 0.5 percent on a broad decline in markets from Australia to China. Japan's Nikkei bucked the trend and gained 1.9 percent thanks to a significantly weaker yen. CNBC reported late on Wednesday that an agreement in principle was in place between Greece and other euro zone governments, lifting risk appetite briefly. Luxembourg's finance minister also said his euro zone counterparts agreed on a way forward to deal with Greece's financing problems. Still, the situation appears far from clear with Reuters reporting that there was no deal yet and a Greek government official insisting there could be no extension of the bailout. "This Greek drama has been a huge overhang over the market. We've been held hostage and ignoring all sorts of other news, for example good economic news on the jobs front, earnings that have been more good than bad," said Art Hogan, chief market strategist at Wunderlich Securities in New York. "Nobody was wanting to have a sloppy Greek exit disrupt the markets right now in what is a fragile European economy to begin with." Market participants awaited a European Council meeting later on Thursday to gauge whether in fact the debt negotiations were moving forward. "The logic of each side demands negotiating until the very last minute as the only way to ensure that the most is achieved. Of course, the nature of the brinkmanship exercise risks a miscalculation that sends both over the abyss," strategists at Brown Brothers Harriman wrote in a note to clients. Risk asset markets also had to keep an eye on geopolitical developments as France, Germany, Russia and Ukraine began peace talks in Belarus as pro-Moscow separatists tightened the pressure on Ukraine in some of the war's worst fighting. In currency markets, the euro dipped as the market tried to digest the conflicting Greek headlines, slipping 0.2 percent to $1.1311 from a high of $1.1353. The dollar traded at 120.27 yen, holding within striking distance of a five-week peak of 120.48 reached amid brightening outlook for the U.S. economy and a corresponding rise in Treasury yields. The Australian dollar fell after weak jobs data increased prospects for further easing by the Reserve Bank of Australia. The Aussie was down 0.8 percent at $0.7660, not far off a six-year low of $0.7627 plumbed last week when the RBA cut rates to a record low 2.25 percent. Crude oil rebounded as conflict in Ukraine escalated and as Saudi Arabia and Russian energy giant Gazprom discussed cooperation between OPEC and its non-OPEC oil producers. U.S. crude was up 1.3 percent at $49.45 a barrel after dropping as much as 3 percent overnight as U.S. stockpiles hit record highs.