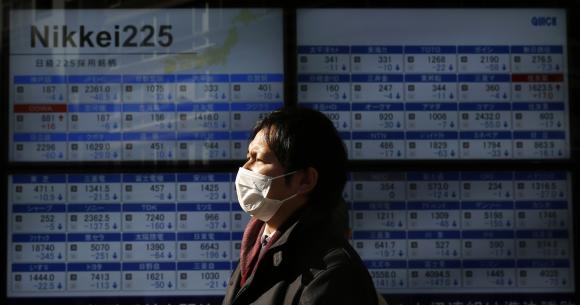 Asian stocks were mostly lower and the euro slipped on Thursday after the European Central Bank said it would not accept Greek bonds as collateral - a robust early response to Athens's efforts to renegotiate bailout terms with creditors. Spreadbetters expected the Greek situation would take a toll on European equities, forecasting Britain's FTSE .FTSE to open down by as much as 0.6 percent, Germany's DAX .GDAXI to fall 0.9 percent and France's CAC .FCHI down 1.1 percent. Risk appetite, which had warmed earlier in the week on hopes that Greece would swiftly win relief from its creditors, took a hit after the ECB abruptly pulled back its soft treatment of Greek debt and canceled its acceptance of the country's bonds as collateral. Japan's Nikkei .N225, which surged 2 percent on Wednesday, dropped 0.8 percent. Shares in South Korea, Malaysia and Singapore were also significantly lower. MSCI's broadest index of Asia-Pacific shares outside Japan .MIAPJ0000PUS was down 0.1 percent after climbing 1 percent the previous day. Chinese equities bucked the trend, with the Shanghai Composite Index .SSEC rising 1 percent, after the central bank cut the level of reserves banks must hold. Wednesday's move, intended to boost bank lending and energize China's sputtering economy, failed to lift the mood in the rest of the region. "Although the move by PBOC does ease credit and may be beneficial to stimulating demand, it is also a clear sign that growth in China is declining at faster rate than previously thought and as such could have dampening effect on demand throughout the Asia region," Boris Schlossberg, managing director at BK Asset Management, wrote in a note to clients. China's easing drove down most emerging Asian currencies such as the South Korean won and Indonesian rupiah. "It will increase expectations for more easing by Asian central banks. It will put pressure on Asian FX to weaken," said Sean Yokota, head of Asia strategy for Scandinavian bank SEB, in Singapore. Investors also became more risk-averse as an extended rally in crude oil petered out. Wall Street snapped a two-day surge overnight, weighed by a slide in energy shares. Crude oil plunged overnight in one of its biggest daily falls ever as record high U.S. oil inventories ended a four-day rally. U.S. crude was down 0.3 percent at $48.31 a barrel CLc1 after sinking 9 percent on Wednesday. [O/R] Among major currencies the euro traded at $1.1348 EUR=, having fallen as far as $1.1304. It has completely reversed a short-covering rally that lifted it to $1.1534 on Tuesday. The dollar was little changed at 117.215 yen JPY=, with the market awaiting the U.S. employment-related data later in the session as a preview to Friday's all important non-farm payrolls. Reuters