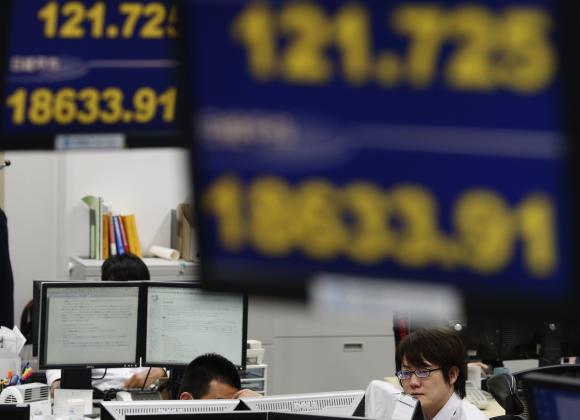 TOKYO - Asian stocks skidded to a two-month low on Wednesday as nervous markets recoiled on worries about an earlier US interest rate hike, a prospect that sent the dollar to a 12-year high against the euro. MSCI's broadest index of Asia-Pacific shares outside Japan .MIAPJ0000PUS was down 0.4 percent after touching its lowest since January. Australian shares lost 0.5 percent and Malaysian and Indonesian stocks also declined. Riskier assets both in the United States and elsewhere have come under pressure after Friday's robust US employment data increased expectations that the Federal Reserve could raise rates as soon as June - a prospect that appeared relatively more remote a few weeks prior. The possibility of higher US yields siphoning away funds from riskier assets drove the S&P 500 .SPX, at a record high two weeks ago, to its worst decline in two months overnight while emerging market stocks .MSCIEF fell to their lowest since early January. Mexico's peso MXN= weakened to a record low and its Malaysian, South Korean, Brazilian and South African counterparts have also suffered heavy hits. Renewed concern about Greece's debt talks with euro zone partners and deflationary pressures in China have also weighed on emerging markets in general. Data on Wednesday reinforced the notion of slowing Chinese growth, with industrial output, retail sales and investment figures proving a shade weaker than expected. ECONCN Japan's Nikkei .N225 bucked the trend and rose 0.5 percent as better-than-expected machinery orders helped offset Wall Street losses. But the deepening decline in the yen, usually a positive factor for Japanese stocks as it buoys exporters, had some worrying about other consequences like the burden placed on importers. "The market started to worry about side effects from a further slide in the yen," said Hiroichi Nishi, general manager at SMBC Nikko Securities in Tokyo, adding that there are also concerns that a stronger dollar hurts US multinational companies' earnings. Spreadbetters forecast Britain's FTSE .FTSE, Germany's DAX .GDAXI and France's CAC.FCHI to open moderately higher, rebounding from the previous day's slide. In currencies, the euro fetched $1.0689 EUR= after touching a 12-year trough of $1.0665. Downward pressure on the common currency increased after the European Central Bank kicked of its quantitative easing program and began its bond-buying on Monday. "In addition to the ECB's starting its bond buying, Greek concerns are likely to weigh on the euro again this week, when there are several Greek-related events scheduled," said Masafumi Yamamoto, market strategist at Praevidentia Strategy in Tokyo. Technical talks between finance experts from Athens and its international creditors are due to start later in the day with the aim of unlocking further funding. The dollar was steady at 121.285 yen JPY=, pulled down from an eight-year high of 122.04 scaled overnight as the broad slide in equities favored the safe-haven yen. The dollar index .DXY remained close to its 11-1/2 year peak of 98.808 climbed the previous day. Hit by the greenback's broad strength and soft Chinese data, the Australian dollar fell to a six-year low of $0.7588 AUD=D4. US crude oil bounced modestly after falling sharply overnight on the dollar's appreciation, which makes commodities denominated in the greenback costlier for holders of othercurrencies. [O/R] US crude was up 1.3 percent at $48.91 a barrel CLc1 after falling 3.4 percent the previous day.