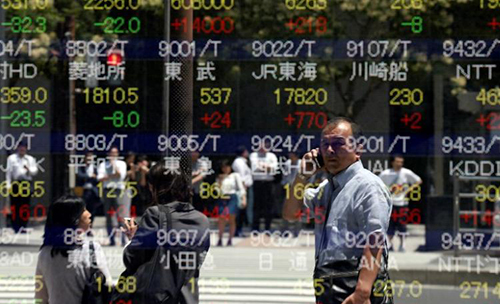 TOKYO - Asian shares steadied near four-week lows on Monday after China agreed to return the US drone it had seized, easing worries for now about possible deterioration in diplomatic relations. But with expectations of US President-elect Donald Trump's policies lifting US interest rates and the dollar, shares in many emerging markets are likely to remain vulnerable to possible capital outflows. MSCI's broadest index of Asia-Pacific shares outside Japan hit a four-week low and last stood down 0.1 percent. It has lost 3.5 percent since Trump won his surprise election victory. Hong Kong shares hit a four-month low as the Hong Kong dollar soared in line with the US dollar to which it is pegged, and after insurance shares were hit by a Chinese regulator's warnings.. Japan's Nikkei, which has benefited from the yen's sharp fall against the dollar, dipped 0.2 percent from Friday's one-year high. Financial markets briefly turned "risk-off" in late US trade on Friday following news that a Chinese Navy warship had seized a US underwater drone in international waters in the South China Sea. The Dow Jones industrial average ended down 0.04 percent to 19,843.41 on Friday, while the S&P 500 lost 0.18 percent to 2,258.07. The diplomatic incident appears to have been resolved for now after the two countries said on Saturday that China will return the drone. "I think the markets' trend will continue. Share prices will edge higher and so will bond yields. The dollar will remain strong. One key question is whether the Dow Jones will hit the 20,000 mark," said Koichi Yoshikawa, executive director of financial markets at Standard Chartered Bank in Tokyo. The yuan is little moved in Asia, firming slightly from Friday's 8 1/2-year low of 6.9616 to the dollar. Still, doubts on the future of Sino-US relations with Trump in the White House could eventually cast a shadow on financial markets, some market players say. Trump has previously threatened to declare China a currency manipulator and force changes in US-Chinese trade policy, which he says has led to the theft of American jobs. He has questioned a highly-sensitive aspect of US-China diplomacy, notably whether Washington will continue to recognise that Taiwan is part of the "One China" line mandated by Beijing. "Their relations seem to be getting worse. Towards Trump's inauguration next month, we could see more volatility in the yuan," said Kenta Tadaide, senior economist at Mizuho Research. "If the yuan hits 7 per dollar, that would attract a lot of attention," he added. Diplomacy aide, many Asian shares have been hit by higher US rates and a stronger dollar, which was sparked by expectations that Trump's fiscal spending and tax cuts plan will fuel growth and inflation. The 10-year US Treasuries yield stood at 2.584 percent in Asia on Monday, near its two-year high of 2.641 percent touched on Thursday. As higher US yields shore up the dollar, the dollar's index against a trade-weighted basket of six major currencies jumped to a 14-year high of 103.56 last week, though it gave up some gains to profit-taking on Monday. The index last stood at 102.71. The euro traded at $1.0459, bouncing back from last week's low of $1.03665, its weakest since January 2003. The dollar traded at 117.59 yen, down 0.3 percent on the day and off Thursday's 10-1/2-month high of 118.66. Oil prices held firm in anticipation of tighter crude supply going into 2017 following the decision by OPEC and other producers to cut output. Brent futures rose 0.7 percent to $55.57 a barrel, while US West Texas Intermediate crude added 0.8 percent to $52.29 per barrel. -Reuters