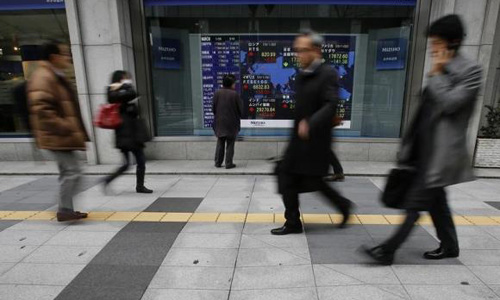 TOKYO (Reuters) - Asian stocks were steady on Wednesday, caught between conflicting signals from lower Wall Street and higher euro zone shares, while the dollar held to modest gains after a rise in U.S. consumer inflation. MSCI's broadest index of Asia-Pacific shares outside Japan .MIAPJ0000PUS stood little changed after a small bounce the previous day. South Korean and Australian shares were effectively flat while Japan's Nikkei .N225 inched up 0.2 percent. The Dow .DJI and S&P .SPX both shed 0.6 percent overnight as U.S. equities maintained a loose inverse correlation with the dollar. The strength of the greenback, which earlier in the month soared to multi-year highs against its peers, has become a concern due to its potential negative impact on U.S. corporate earnings. European stocks, on the other hand, held near record highs the previous day on stronger-than-expected euro zone manufacturing data. The European Central Bank's extensive quantitative easing policy has been a boon to European shares. The euro was little changed at $1.0912 EUR= after slipping from an overnight peak of $1.1029 briefly reached on the upbeat euro zone data. The common currency has steadily recovered from a 12-year low of $1.0457 hit last week after a dovish-sounding Federal Reserve dimmed prospects for an earlier interest rate hike and blunted the dollar's advance. The dollar was steady at 119.75 yen JPY= following an overnight bounce from a low of 119.22. A decline in U.S. Treasury yields limited the dollar's gains. The U.S. currency was still some distance from an eight-year peak of 122.04 scaled two weeks ago when expectations for an earlier Fed rate hike were stronger. The yield on benchmark 10-year Treasury notes US10YT=RR slipped to a six-week low overnight thanks to a weaker Wall Street, with the debt market brushing aside a 0.2 percent rise in U.S. February consumer price index. ECONUS The drop by the 10-year Treasury yield is an indication "that while equities are pricing in Fed tightening, bond traders are not concerned about rising rates," Kathy Lien, managing director for FX strategy at BK Asset Management wrote in a note to clients. - REUTERS