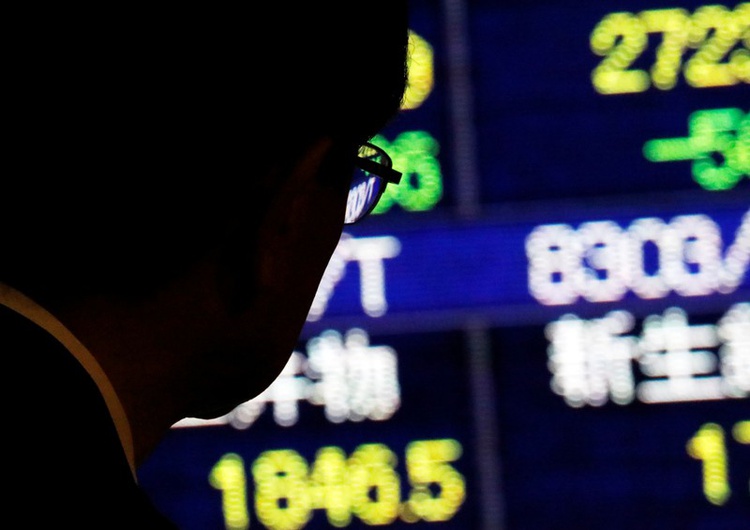 TOKYO (Reuters) - Asian stocks rose on Thursday, taking heart from a bounce in Chinese shares on news that China has delivered a written response to US trade demands, while oil prices resumed their retreat on fears of oversupply. US government sources told Reuters on Wednesday that China had sent a response to US  demands for trade reform but gave no further details, raising hopes the two sides could resume negotiations to end their trade war. US oil futures CLc1 fell 0.6 percent to $55.92 a barrel, after a slight bounce overnight that followed 12 straight losing sessions. Brent LCOc1 was down 0.5 percent at $65.89. MSCI’s broadest index of Asia-Pacific shares outside Japan .MIAPJ0000PUS was up 0.2 percent. The index had fallen the previous day as the sharp slide in oil prices heightened anxiety about the outlook for broad demand and global growth. Shanghai Composite Index .SSEC gained 0.8 percent, while Hong Kong's Hang Seng .HSI rose 0.4 percent. Traders have cautiously welcomed news in recent days that Washington and Beijing have resumed informal discussions ahead of a meeting between presidents Donald Trump and Xi Jinping late this month. Few market watchers expect a trade agreement at that meeting but hopes are growing that they may agree on a de-escalation while the two sides pursue more detailed talks. Elsewhere, Australian stocks fell 0.5 percent and Japan's Nikkei .N225 shed 0.25 percent. “While it’s difficult to pin-point a specific event for the risk-off move, recent themes appear to be keeping markets cautious include oil’s recent plummet, Apple’s fall, U.S. political gridlock, China’s slowing growth, tightening liquidity, a hawkish Fed, earnings peak, Italian jitters, and Brexit uncertainty,” wrote economists at ANZ. The S&P 500 .SPX fell for a fifth straight day overnight as financial stocks were hit by fears that banking industry regulations would tighten once the Democratic Party takes control of the House of Representatives. US equities were also pressured by concerns that earnings growth might be peaking, trade tensions and a slowing global economy - factors that had triggered a rout in riskier assets in October. “If U.S. stocks are to bounce back, economic indicators will be key,” said Junichi Ishikawa, senior forex strategist at IG Securities in Tokyo. “Immediate focus will be on today’s U.S. retail sales data, which will provide a view of how private consumption -the main component of economic growth- is faring.” US retail sales for October will be released at 1330 GMT. In currencies, the pound and euro kept gains made after British Prime Minister May’s cabinet backed her draft Brexit deal. May now has to gain the support of parliament, though it is unclear whether she has enough votes to clinch approval. The pound was a shade higher at $1.2998 GBP=D4 after peaking at $1.3072 on Wednesday, when it tacked on 0.1 percent. The euro added 0.15 percent to $1.1325 EUR= after advancing 0.2 percent overnight. The single currency’s upside was limited by uncertainty on how European Union officials would react to Italy’s latest fiscal proposal after they rejected a version of it last month for violation of certain EU rules. Italy on Wednesday re-submitted its draft 2019 budget to the European Commission with the same growth and deficit assumptions as a draft rejected for breaking European Union rules, stepping up its showdown with the EU over its fiscal policy.