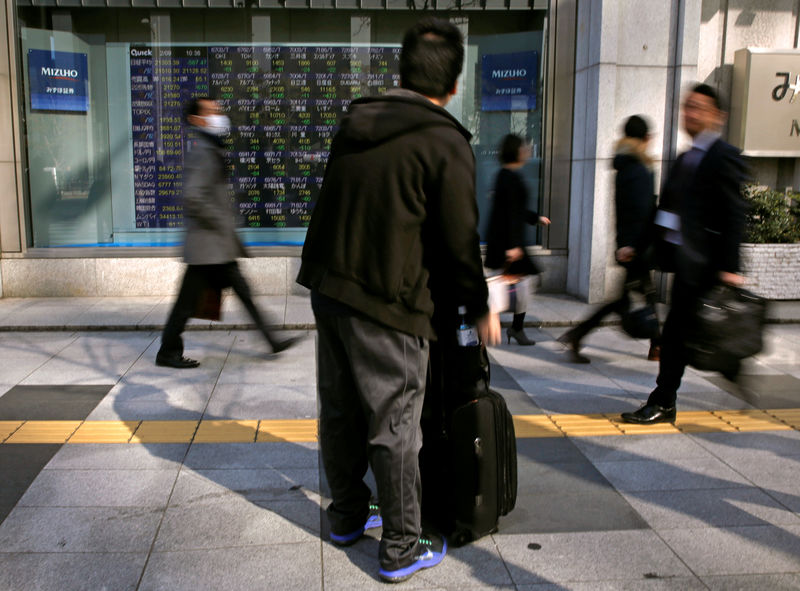 TOKYO (Reuters) - Asian stocks rebounded from a two-month trough on Thursday, while the euro enjoyed a respite after sinking to its lowest in 10 months as political turmoil in Italy that had roiled global financial markets showed signs of easing. MSCI’s broadest index of Asia-Pacific shares outside Japan .MIAPJ0000PUS gained 0.56 percent after slumping to its weakest since the start of April. Hong Kong's Hang Seng  rose 0.5 percent, South Korea's KOSPI added 0.6 percent and Japan's Nikkei advanced 0.5 percent. The Shanghai Composite Index  rose 0.9 percent after data showed China's factory growth in May accelerated strongly and well above forecasts to an eight-month high. Overnight, the Dow  rose 1.25 percent and the S&P 500 climbed 1.27 percent. Stocks in Italy, the epicenter of the latest market tumult, bounced back 2.1 percent. But it had given up all the gains made in 2018. Global stocks were battered, safe-haven government bond yields fell sharply and the euro tumbled earlier in the week after Italy’s two anti-establishment parties scrapped plans to form a coalition. That raised the prospect of a general election, stoking fears such a vote will effectively be a referendum on the country’s euro membership. A degree of calm, however, returned, with the two anti-establishment parties renewing efforts to form a coalition government rather than force Italy into holding elections for the second time this year. “Experience shows that these ‘crises’ tend to settle down for long periods once the initial adjustment of market expectations has been effected,” wrote Carl Weinberg, chief international economist at High Frequency Economics, in a note to clients. Italy’s successful auction of five- and 10-year government bonds also assuaged concerns about its ability to finance itself after turbulence in its debt market resulted in the biggest one-day surge for two-year yields in 26 years. “The financial markets had been able to assess and digest the situation in Italy over the past few days and it is now time for a bit of reprieve from the turbulence,” said Masahiro Ichikawa, senior strategist at Sumitomo Mitsui Asset Management in Tokyo. “The reprieve will allow the market to return their focus back on fundamentals, such as Friday’s US non-farm jobs report.” The euro stood little changed at $1.1658 after rallying 1 percent the previous day. The currency had sunk to $1.1510 on Tuesday, its lowest since late July 2017. The dollar index against a basket of six major currencies .DXY dipped 0.1 percent to 94.089 after surging to a near seven-month peak of 95.025 on Tuesday. The US currency traded at 108.590 yen , off a low of 108.115 brushed on Tuesday when risk aversion in the broader markets increased investor demand for its Japanese peer, which is often sought in times of market unrest. The dollar received some support as signs of easing Italian political concerns pulled US Treasury yields up from multi-week lows. The 10-year Treasury note yield US10YT=RR stood at 2.842 percent after sliding on Tuesday to 2.759 percent, its lowest since April 11. Oil prices eased after rallying overnight as Russia’s central bank expressed caution on plans to boost oil supply. US crude futures CLc1 fell 0.25 percent to $68.03 a barrel after gaining 2.2 percent .Prices had fallen to a six-week low of $65.80 a barrel on Tuesday amid concerns that Saudi Arabia and Russia could increase output. Brent crude LCOc1 lost 0.5 percent to $77.10 a barrel after jumping 2.8 percent.