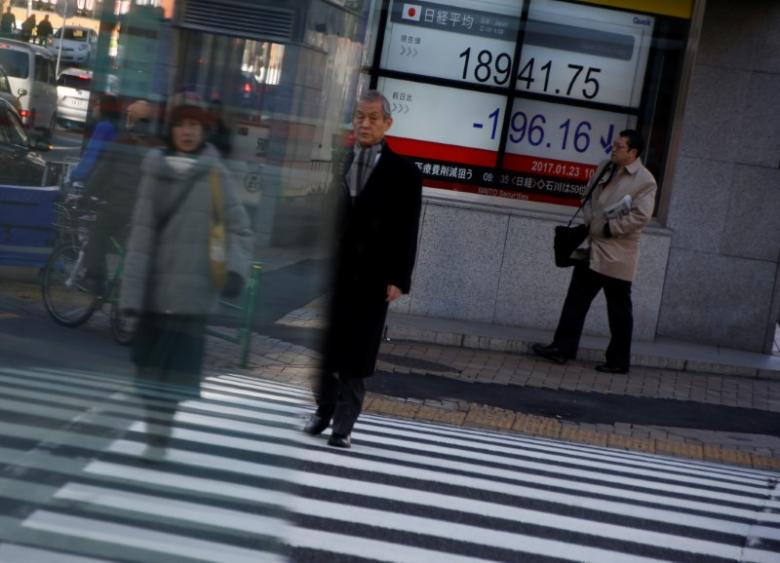 TOKYO - Asian stocks were mostly higher on Wednesday, as strong earnings and manufacturing data boosted risk appetite, while expectations that the Federal Reserve will signal a June rate increase later in the session lifted the dollar.

Oil prices pulled higher after a sharp fall on Tuesday on technical selling in a market already worried about oversupply and following a rise in output from several members of the Organization of Petroleum Exporting Countries.

MSCI's broadest index of Asia-Pacific shares outside Japan was slightly lower on Wednesday, within a hair of a near-two-year high hit on Tuesday.

Hung Tran, executive managing director at the Institute of International Finance, said investors are currently struggling to price in outcomes amid a volatile political environment.

"The very benign investment backdrop—supported by a cyclical upturn in the global economy, central bank liquidity and a persistent savings glut—has also helped cushion markets from political shocks," Tran wrote in a report.

Hong Kong and South Korea are closed for the Buddha's birthday, and Japan is shut from Wednesday until Friday for the Golden Week holiday.

Australian shares dropped 1 percent, failing to find new catalysts to lift it above a two-year high hit on Monday.

The pan-European Stoxx index jumped to its highest level since August 2015 on Tuesday as major European indexes posted gains.

Overnight, Wall Street closed higher, although Nasdaq futures fell alongside Apple shares in extended trading, after the company reported a surprise fall in iPhone sales for the second quarter.

Markets are awaiting word from the Fed, which concludes its two-day meeting later on Wednesday. With the central bank largely expected to hold interest rates steady, the focus will be on language about future increases.

Since the last meeting, economic data has been mixed, with the economy growing at a sluggish 0.7 percent annual pace in the first quarter as consumer spending almost stalled.

A decline in US new vehicle sales for April, following a disappointing March is also prompting worries that the industry, which has seen a nearly uninterrupted boom since 2010, may be on a downward swing.

But a surge in business investment and the fastest wage growth in a decade suggest activity will regain momentum as the year progresses.

"Concerns about geopolitical risks such as North Korea had weighed on the dollar against the yen recently... But the focus is shifting to whether the (strength) of US economic fundamentals is for real," he said.

"There is more data coming up including the jobs data, so those need to be watched closely," Okagawa said, referring to the US nonfarm payrolls report due on Friday.

The dollar was little changed at 112.07 yen on Wednesday. It touched a six-week high on Tuesday but fell back to close 0.2 percent higher.

The dollar index, which tracks the greenback against a basket of trade-weighted peers, was slightly lower at 98.92.

Eurozone unemployment remained at 9.5 percent in March, the lowest level since April 2009, while manufacturing growth for April was at or near six-year highs in France and Germany, and rose to a three-year peak in the UK.

That followed data from Asian economies including Indonesia, Malaysia, India and Japan that all showed faster manufacturing growth in April. While growth in China eased more than expected, the world's second-largest economy nevertheless avoided a sharp loss of momentum.

In commodities markets, crude advanced after falling to multi-month lows overnight, on fears of rising output in the US Canada and Libya and worries that OPEC members' commitment to a deal to cut production may be slipping.

While output from all 13 OPEC members together fell in April from March, supply from 11 members with production targets under the deal rose, in the first increase since the pact took effect at the start of the year.