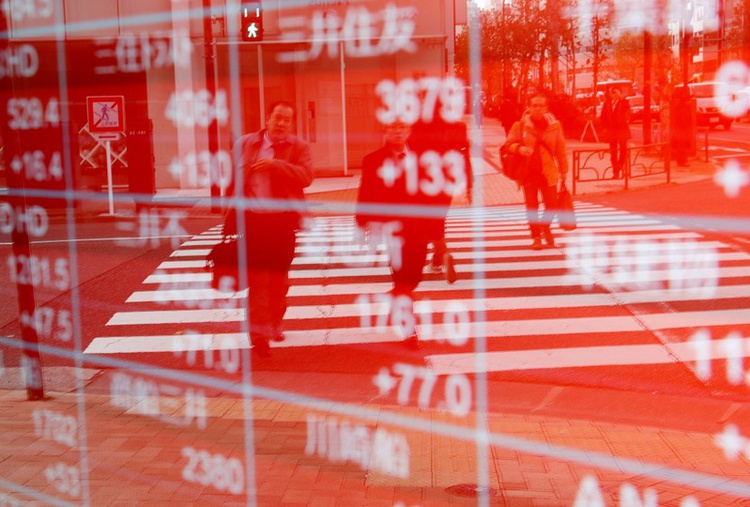 TOKYO (Reuters) - Asia stocks rose to a four-month high on Thursday after the Federal Reserve pledged to be patient with further interest rate hikes, signaling a potential end to its tightening cycle amid signs of slowing global growth.
The dollar struggled near a three-week trough against its major peers and US Treasury yields were significantly lower as investors reacted to the Fed’s change in tone. MSCI’s broadest index of Asia-Pacific shares outside Japan rose to its highest since Oct. 4 and was last up 0.7 per cent. Japan’s Nikkei rose 0.9 per cent. In Asia, The Shanghai Composite Index climbed 0.8 percent despite data showing China’s factory activity contracted for a second straight month amid weakening orders. Australian stocks edged up 0.1 per cent. The Fed on Wednesday held interest rates steady as expected, and also discarded its promises of “further gradual increases” in interest rates. The central bank said it would be “patient” before making any further moves amid a suddenly cloudy outlook for the U.S. economy due to global growth risks and impasses over trade and government budget negotiations. On Wall Street, the Dow and the Nasdaq rallied 1.7 percent and 2.2 percent, respectively, on hopes the Fed’s pause would give the U.S. economy and corporate profits more room to run. Late in December the Dow had sunk to its lowest level since September 2017, dogged by factors including worries over cooling economic growth and trade tensions, adding pressure on the Fed to reassess its tightening bias. “The Fed’s statements firmly confirmed its dovish stance, which had already been on display at the start of the year. Market concerns towards the Fed’s rate hikes have now been put to rest,” said Masahiro Ichikawa, senior strategist at Sumitomo Mitsui Asset Management in Tokyo. “The mention of the balance sheet by the Fed was a positive surprise. The focus now shifts immediately to US-China trade talks, but the equity markets could have enough cushioning to withstand negative news from the talks.” The US central bank also said on Wednesday that its balance sheet would remain larger than previously expected. However, while market expectations for Fed tightening may have waned significantly, some analysts suggested rate hikes still remained a near-term possibility. “While many of the risks to the US outlook remain in place, there is little to suggest that the outlook has changed by as much as the Fed communication says it has,” wrote Michael Gapen, chief US economist at Barclays. “We worry that the Fed has traded near-term support for financial markets and the economy for another round of volatility later this year if it is forced to lift rates higher, which remains more likely than not, in our view.” With the Fed decision out of the way, investors focused their attention on a pivotal round of high-level US-China trade talks which began on Wednesday aimed at easing a months-long tariff war. The two-day talks in Washington are expected to be tense, with little indication so far that Chinese officials are willing to address core US demands to fully protect American intellectual property rights and end policies that Washington has said force US companies to transfer technology to Chinese firms. If the two sides cannot reach a deal soon, Washington has threatened to more than double tariffs on Chinese goods on March 2. In currencies, the dollar index against a basket of six major currencies struggled near a three-week low of 95.253 brushed on Wednesday, when it had sunk 0.5 percent. A weaker dollar helped nudge the euro to $1.1501 on Wednesday, its highest since Jan. 11, and the common currency was last up 0.15 percent at $1.1493 . The greenback was down 0.15 percent at 108.88 yen and close to a two-week low of 108.81 reached overnight. The pound was steady at $1.3117 , given some reprieve after slipping earlier in the week when British lawmakers voted down a proposal in parliament that could have prevented a potentially chaotic “no-deal” Brexit. The benchmark 10-year US Treasury yield extended its decline to as far as 2.674 percent, its lowest since Jan. 14. Oil prices rose after US government data showed signs of tightening supply and as investors remained concerned about supply disruptions following US sanctions on Venezuela’s oil industry. US crude oil futures were up 0.7 percent at 54.59 per barrel. Earlier, Asia shares stumbled and the dollar hovered near two-week lows as prospects for a long-awaited Sino-US trade deal were dealt another blow after the US levelled sweeping criminal charges against China’s telecom giant Huawei.